Book review: One man’s dogged search for the number zero 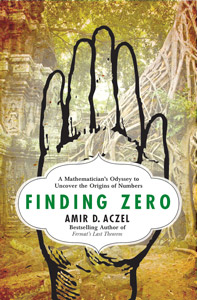 FINDING ZERO: A MATHEMATICIAN’S ODYSSEY TO UNCOVER THE ORIGINS OF NUMBERS

Aczel is a mathematican who had an interesting nautical childhood—the subject of an earlier book, The Riddle of the Compass—that included a fascination with what we usually call the “Arabic numbers.” It is a well-justified fascination. The 10 digits introduced to the Latin world by Leonardo of Pisa might be the most successful cultural innovation of all time: There are holdouts against the Gregorian calendar, and rebels against “Western” musical tonality, but there are very few accountants anywhere using anything professionally but the shapes “1, 2, 3 . . .”

Leonardo didn’t invent the Arabic numerals, but neither did the Arabs who taught them to him. They are sometimes now called the “Hindu-Arabic” numbers by scholars, since the Arabs seem to have acquired them from India, but the oldest confirmed uses of the system stretch farther east, to Indochina. Which does not necessarily mean they weren’t an Indian invention.

The crucial innovation was not the particular shapes, which have mutated fantastically over the centuries, but the use of a distinct character for zero as a placeholder in the representation of natural numbers. Writing “805” or “3,000” eventually leads to zero as a concept, and only when that barrier is broken is the road open to higher abstractions—negative numbers, the Cartesian plane, and all that follows.

Aczel’s new book is a combination of scholarly monograph, personal memoir and ill-tamed philosophical essay that documents his search for an important object called K-127. K-127 is a stele, a freestanding stone with an inscription, from an ancient Cambodian temple complex at a place called Sambor. It mentions a year, “605 of the Çaka era,” that corresponds to 683 CE: The zero in the tens place of this inscription, represented in the Old Khmer script as a dot, is the oldest surviving written example. The stele was documented by a French antiquarian in 1931, and no one has doubted that it existed; but it is little-known, considering its importance, and no one was sure the item had survived the rule of the mad Khmer Rouge communists.

Aczel’s curiosity drove him to comb through the remnants of deliberately vandalized museums—the ruins of ruins—to try to find K-127. Along the way, he met corrupt officials and shady art dealers and talked math, sex and Eastern philosophy with holy men of various varieties. It’s a nice fish story about the legwork behind a small but significant piece of scholarship.