CanLit, with a mind-bending twist 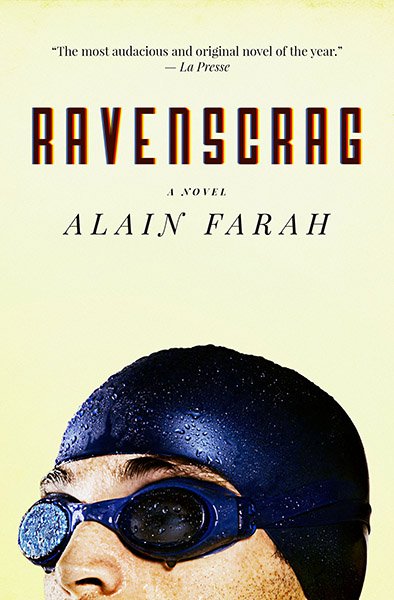 Ravenscrag will probably strike readers as the work of a writer whose productivity isn’t geared at all toward Canada Reads popularity. At first glance, the novel may seem purposely, even perversely, difficult. From the first clauses of his opening sentence, “In intergalactic space, where it is nice to take refuge at times,” Farah confounds expectations. Instead of a familiar setting grounded within the dutiful realism that’s a default mode for much of Canadian literature, he throws readers into a decidedly weird—and often both surreal and beguilingly topsy-turvy—Montreal, the city as perceived by a paranoid and intermittently raving character named Alain Farah.

Over the brief novel’s 140 chronologically shuffled sections set between 1962 and 2012, the fictional Farah explains that he’s an experimental writer who was abandoned by his gambling-addicted mother in a Montreal ghetto (perhaps) and raised in a creepy Catholic orphanage (take that claim with a grain of salt too). He might (or might not) be addicted to psychotropic capsules prescribed by a McGill prof whose research is devoted to perfecting brainwashing techniques for use by the CIA. That villainous clinician, Dr. Cameron, who happens to work at the Allan Memorial Institute (a.k.a. the Victorian mansion formerly known as Ravenscrag), meets the unbalanced narrator for a one-minute consultation and arrives at the following diagnosis: “The little you’ve told me indicates that you may be suffering from a mild form of insanity.” Indeed.

If that initial glance causes readers puzzlement (especially when wrangling with assertions of this sort: “To write the story of your life, you must first have had one. Hence, the story that I write is not my own, because I do not exist”), continued exposure leads to a semblance of comfort with Farah’s disturbed outlook, just as viewers grow accustomed—more or less—to the world of Eraserhead or Tales From the Gimli Hospital. There’s bizarre humour, which riffs promiscuously on everything from Blade Runner to Plato and Lady Gaga, abundant style, and a queer logic that results from a splintered consciousness striving to make sense of itself.

Along with mind-bending recent Canadian works like Lynn Crosbie’s Life is About Losing Everything and Temenuga Trifonova’s Rewrite, Farah’s book expresses little interest in tried-and-true approaches. True to its own vision, it might also take some pleasure in pushing boundaries and making a reader struggle and work to make sense of the art form.