In pursuit of Lance Armstrong: A chronicle of cycling's greatest fraud 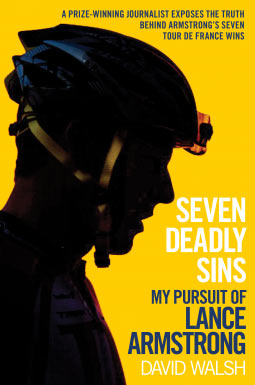 What the Great White Whale was to Captain Ahab, Lance Armstrong is to author David Walsh. To suggest the Irish sportswriter was obsessed with cycling’s greatest fraud doesn’t do it justice. The relationship between pursuer and quarry was closer to folie à deux. Walsh spent 13 often-very-lonely years trying to convince the world of what he believed was painfully obvious—St. Lance was a cheat. And Armstrong expended just as much energy trying to discredit, humiliate and destroy him.

A journalist with the Sunday Times, Walsh had been covering the Tour de France for a decade when he first met Armstrong in 1993. Initially, he liked and admired the painfully blunt and nakedly ambitious Texan. But when Armstrong returned to cycling’s greatest test in 1999, after his near-fatal brush with cancer, he was clearly a different man: thinner, meaner and much, much better. In four previous Tours, the American had been a threat on the flats, but never in the time trials or climbs (over nine career mountain stages, his best finish was 39th.) Now suddenly he wasn’t just competitive, but unbeatable, laying down scorching rides that eclipsed the feats of men who had already been exposed as dopers. That year, on his way to his first of seven yellow jerseys, Armstrong even failed an in-race drug test. (It was explained away with the help of his doctors and the UCI, cycling’s governing body.) Walsh knew the story didn’t add up, and he earned Armstrong’s eternal ire by pointing it out.

But that’s really just the starting point of Seven Deadly Sins, which chronicles more than a decade of incremental discoveries, denial and enabling. Walsh paid a heavy price for his doggedness—publicly vilified, ostracized by many of his compatriots and forever awash in legal actions. Although, as he describes, many of his sources had it much worse: there were no ends to which Armstrong wouldn’t go to protect his empire.

The book is a victory lap, and as the title suggests, as much about the author as the subject. But Walsh’s engaging and wry style makes even the rehashed aspects of the story well worth the trouble. And for sports fans, and in particular writers, Seven Deadly Sins should stand out for its lesson: if something seems too good to be true, it almost invariably is.