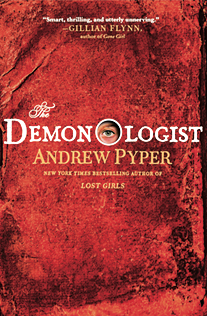 Toronto crime writer Andrew Pyper takes a stab at his first proper horror novel with The Demonologist, a literary travelogue of terror about a father’s search for a daughter he believes has been kidnapped by demonic forces. Despite being rooted in the Biblical and marketed to fans of Elizabeth Kostova’s gothic bestseller The Historian, the story is wholly contemporary, tackling questions of faith and the supernatural in the modern age. Namely, what if Paradise Lost wasn’t fiction? And if you found that to be true, who would believe you?

Professor David Ullman is a former Torontonian now teaching English at Columbia University. His specialty is Milton’s classic text on the fall of man and the rise of Satan, the rebel angel—which he concedes is an ironic role for an atheist. When an old woman appears at his office offering a wild sum of money for him to travel to Italy simply to observe an unmentionable “phenomenon” on the same day his wife asks for a divorce, he gathers his bags, his melancholic teenage daughter and his uneasy curiosity and heads straight for Venice. It’s not what he finds there that rattles his soul (although that is scary enough), it’s what he loses: his daughter’s deadly fall from a rooftop into the canal is officially deemed a suicide but he’s convinced she lives on—in the Underworld.

Using clues gleaned from Paradise Lost and encounters with malevolent entities, Ullman sets off across America to rescue the girl, a journey marked by the Denny’s and Hampton Inns familiar to anyone who has spent long nights travelling the interstates. As the Devil’s minions make their presence felt, the professor is aware of the ridiculousness of his plight, a “teacher with a lapsed gym membership” facing down hell’s angels. Yet powered by a parent’s grief he steadfastly plunges headlong into the “darkness visible.”

The Demonologist reads like a ready-made screenplay, a fast-paced Exorcist-meets-Da Vinci Code where the actual horror happens off-screen, in the mind. Which, as Pyper surely knows from Milton, is where evil truly dwells.