The dirt on archaeologists: Book review

Johnson’s book about archaeologists—their passion, tenacity and sense of humour—is filled with many fun (and disgusting) facts 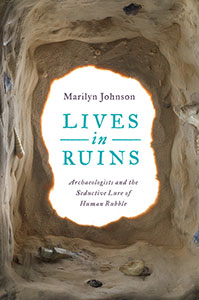 LIVES IN RUINS: ARCHAEOLOGISTS AND THE SEDUCTIVE LURE OF HUMAN RUBBLE

On the surface, things don’t look too promising for the field of archaeology. In 2014, Forbes listed it as the worst college major. Jobs are scarce and the pay pitifully low. One British archaeologist applied for 300 jobs before finding one. His T-shirt reads: “My life in ruins.” It’s probably where Marilyn Johnson got the title for this book; it perfectly suits her story about the characters in the business: their passion, tenacity and sense of humour.

Johnson visits museums and far-flung digs. In Ireland, she marvels at the 2,000-year-old body of a man whose flesh and organs were so amazingly preserved by bog water that archaeologists were able to lift his fingerprints. In Rhode Island, she meets marine archaeologist Kathy Abbas. Abbas has single-handedly created an independent research centre to study a fleet of locally sunk 18th-century ships, including Captain Cook’s. To cover lab costs and support herself, Abbas worked as a cleaning lady, scrubbing some of the nicest homes in Newport. She told Johnson, “Fairly wealthy women knew I was building this non-profit. You’d think they’d give you a tip or donation. But no. I still run into women who say, ‘You were the best, I miss you. I can’t get anyone who cleans as good as you.’ ”

At the State University of New York, Johnson becomes a student of paleoarchaeologist John Shea. (Harvard rejected Shea as a grad student, but his knowledge and passion persuaded the archaeologist Glynn Isaac to get Shea a full scholarship at the school.) Shea’s vivid descriptions untangle the branches of the human tree. He tells the class: “Homo sapiens lived in caves and put trash in front and slept in the back. Not so with Homo heidelbergensis. Those humans lived like frat boys . . . Commandos without too much thought. If you were going to cast Jersey Shore, you’d go with heidelbergensis.” As for Australopithecus, the big-toothed proto-humans of Africa, Shea declares, “The first thing you’d hear as you approached them is farting.”

Who could forget a detail like that? Not Johnson. She passes Shea’s exam with flying colours and fills her book with every fun fact she comes across.