The true story of Canada's version of The Dude: Book review 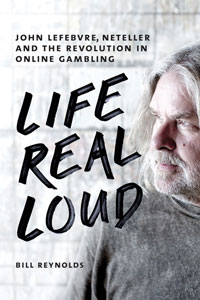 John Lefebvre is, in many ways, a real-life version of the Dude, the likeable hippie from the Coen brothers’ cult classic film, The Big Lebowski, with two notable exceptions: Lefebvre is Canadian and he is incredibly rich. When he helped start the e-money transfer system Neteller in 1999, it was a small-time operation with a modest office in Calgary, struggling to pay employee wages. But when the online gambling boom took off, Neteller became the system of choice for many poker sites. It also put Lefebvre on the FBI’s radar when it began stomping out illegal gambling.

Life Real Loud traces Lefebvre’s journey from a modest house in Calgary to his multi-multi-multi-million dollar Malibu beach home not far from Cher’s. It’s hardly a “how to” guide for getting rich. Lefebvre smoked a lot of marijuana growing up, got busted for selling acid to an undercover cop, became University of Calgary student union president, kept smoking pot, quit a good job as a lawyer to busk as a musician, and smoked up some more. Music was his passion, and money didn’t matter. Then Neteller made him wealthy.

At first, Lefebvre couldn’t spend enough on luxury cars and designer clothes to keep up with his growing net worth. Then he ditched the fancy wardrobe for jeans and T-shirts and tried to give a fortune away to charities afilliated with David Suzuki, the Dalai Lama and the like. What’s a couple of million here and there when your bank balance is nine digits long?

Reynolds draws out his subject’s own storytelling, as Lefebvre candidly opens up about failed relationships, the online gambling business, and the time the FBI arrived at his door in 2007 to arrest him on charges of money laundering and promoting illegal gambling. Sure, the publicly traded company was based in the Isle of Man, but the bulk of Neteller’s customers came from the U.S., and it was time to pay up to Uncle Sam. A plea deal cost him a good chunk of his bank account, but saved him a lengthy prison sentence. Lefebvre isn’t bitter, but he’s not exactly struggling for cash today. Online gambling helped turn him into one of Canada’s most generous—and virtually unknown—philanthropists. It’s not likely that legacy will survive him, however. Nor is he looking for fame. Instead, when he dies, Lefebvre only wants four words on his epitaph to describe him: “He never stopped tokin.’ ”