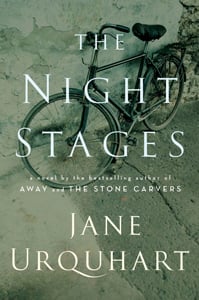 This panoramic study of departures and arrivals, loss and discovery, begins, appropriately, with flight. Tamara, a British woman, flees Ireland for New York in the late 1950s, running from a failed affair with a married man. Fog grounds her plane at Gander airport, giving her days to contemplate a mural by the Canadian artist Kenneth Lochhead. Thus sets the stage for Jane Urquhart’s eighth novel, a gorgeously written, virtuosic weaving of time, place and characters connected in profound, tenuous and occasionally surprising ways.

At the centre are the estranged Riordan brothers—the heartbreaking Kieran and successful Niall—raised in County Kerry in the 1940s. Kieran, the younger, is a volatile boy “full of refusal” who broke his mother’s pelvis entering the world and experienced dislocation ever after. Only bicycling through the countryside offers escape. Life was more generous to Niall, a golden child who becomes a meteorologist; he marries, then embarks on an affair with Tamara, a former Second World War auxiliary pilot turned aircraft illustrator living in rural Ireland. Lochhead’s story, before and during his mural’s creation, is punctuated throughout.

The result is a clever puzzle of a narrative that shifts between Ireland, Canada, England, Italy and America. Urquhart’s meticulously detailed, languid storytelling summons an earlier era; the book’s power accumulates stealthily over 400 pages, culminating with the gripping account of An Post Rás, an eight-day Irish bicycle race in which the brothers square off with Greek-myth intensity.

Much of The Night Stages is Irish in setting and sentiment; a grey, damp turbulence prevails. There’s plenty of Irish sorrow as well; a character describes the sound of weeping as “a long, smoke-coloured ribbon winding down the hall and slipping under his door.”

Urquhart’s ambitions are bigger, however, as she links Irish countryside with Canadian Prairies, the art and music of everyday Irish life with the methodology behind a Canadian’s artistic creation. At the outset, Lochhead seems an outlier in the story, even as his chapters are among the most engaging. In time, the logic of his inclusion is clear. Contemplating the figures in Lochhead’s mural, Tamara marvels at their connectivity, at how “there are no disparate parts.” The very same can be said for Urquhart’s latest literary triumph.