Q&A: The Canadian athlete discusses his memoir, 'A Runner's Journey', and how athletics and social activism are inseparable for him 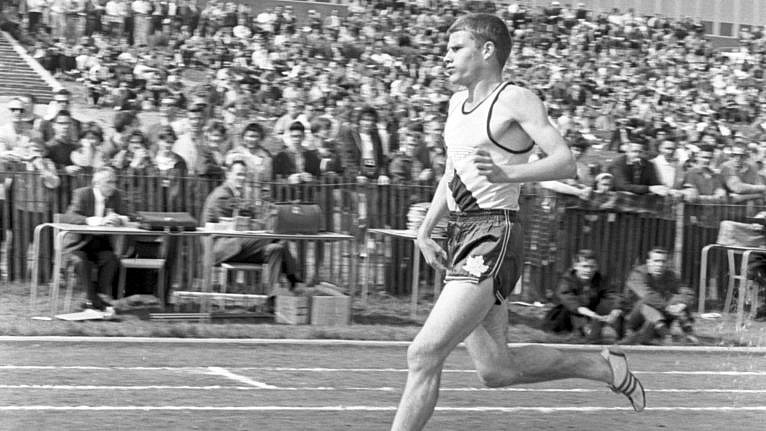 Bruce Kidd competing in a track and field meet in Ancaster, Ont. on May 25, 1963. (Boris Spremo / The Globe and Mail)

Athlete, academic and author, Bruce Kidd has been an iconic presence in Canadian sport for six decades. A distance runner with 18 championships and a Lou Marsh Trophy as Canada’s outstanding athlete of the year to his name, Kidd has also been an outspoken advocate for athletes’ rights and the value of sports. Now 78, he has written his ninth book, A Runner’s Journey, a tightly structured memoir about the tight interweaving between sport and society, in both the world at large and in his own life.

Q: Your memories of growing up in Toronto’s Beach neighbourhood aren’t just about your own childhood. You vividly portray an almost-forgotten sports past, when there was more of a continuum between amateur and professional and more intense local interest. You can actually remember the Balmy Beach football team competing for the Grey Cup?

A: Yes, that is correct. When I was a delivery boy I delivered papers or groceries or pharmacies to many of the players. My earliest memories of sports were that two or three of the local fathers on our street played softball and hockey at a pretty high level. And we’d go see them. They wouldn’t come to our games. We’d go see them play. Then the adults stopped playing sports themselves and spent their time coaching their kids’ games. By the end of the 1950s, everything had changed.

Q: You write about increasing emphasis on high-end professionalism and the “pernicious gendering” of mass participation sports.

A: It was very much a transitional time. The Maple Leafs professional baseball team was one of the best minor-league teams. In the last days of Black baseball and early years of integration, we got to see some remarkable players, from the very cheap seats provided for kids. I mean, I watched Satchel Paige! And it was also the last days of great women’s softball—a later teammate of mine had an aunt who played in that league. After the first war, there was a feminist ascendancy in sport, as in other areas. But after the Second World War, that was all shut down—Rosie the Riveter sent home to have babies. One of the reasons I was motivated to write this book is because growing up—and even when I was becoming an advocate for athletes—I knew very little of Canadian sports history. I didn’t know until I started studying it, 20, or 30 years later, that the postwar years were the end point of a glorious period of women’s sport.

Q: A Runner’s Journey shows how a lot of that history was shoved down a memory hole—including the political activism that swirled about the Berlin Olympics in 1936—leading to the still-extant assumption that sports and politics are entirely separate spheres. That was a personally painful attitude when you were a member of the Waffle, the NDP’s radical wing, around 1970.

A: Yeah. It was hurtful when people I admired would say, if I left a meeting early because I had track the next morning, “Bruce, why are you still running? Why are you wasting your life playing sports?” And I would also have teammates who thought I was bananas being involved in politics—which I understood because I, too, grew up with this commandment that sport and politics, sports and society, do not mix. All that when it was hard enough to pursue high-performance sport and academic excellence at the University of Toronto at the same time. But I was stubborn about giving up one or the other, and my father—along with several professors, too—was always supportive of doing more than one thing. For my father, it was always, don’t let other people tell you what you can and cannot do.

Q: The connecting theme of your memoir is how the two strands of your life, athletics and social activism, were inseparable for you.

A: Although I had so many influences—parents and friends or exemplars in the community—who provided models of responsible political leadership, it was athletics that propelled me on my particular journey. Even though I was this little kid among older athletes, they looked to me to bail them out, stand up for them, find a solution, and with more confidence than brains I stepped into that. Was that from being an athletic prodigy or because of other qualities? That’s a great question. Don’t know.

Q: After the 1964 Tokyo Olympics, you started to focus on the larger place of sports in society, coming to believe it’s impossible to describe a society without discussing its sports. Can you expand on that?

A: It was a process, not a eureka moment. I gradually realized, as I began to apply the political-economy lens to sport, that communications, transportation, the spatial organization of cities, the calendar of daily life and more were all shaped by, or shaped in some way by, sports. I could see it in the subway lines and streetcar lines and development decisions in Toronto, all motivated in part by the possibilities of sport. And that meant we should start seeing the big policy questions in sports as public issues.

Q: Part of the process must have involved seeing the resurgence of sports activism in the 1960s era of protests?

A: My awakening was in that context, yes. The growing activism, the growing awareness, and the growing articulateness of Black athletes—that was eye-opening. I was hearing the stories of teammates, like [Olympic medal-winning sprinter] Harry Jerome, and it mattered to me that I was trusted to hear those stories. From running I made a lot of connections with people in U.S. track. I don’t remember the details, but Dick Gregory, who became one of the most famous Black comedians ever, was a track guy and his brother ran for Notre Dame. And when he appeared at a bar in downtown Toronto, I went see him—though I didn’t go to bars or stay that late—and we talked politics for a couple of hours. I think that’s where I first heard about this idea of the boycott of an Olympics to protest the way Black athletes were used in a Cold War context to promote a favourable image of the United States in Africa and Asia, and then sent home to unemployment, horrible housing, no medical care and so on. I had a whole series of those kinds of episodes when I was just this young guy with my ears open, and it started to sink in.

Q: You were involved very, very early, in the years after the Montreal Olympics were announced, in a reaction against Olympics extravagance that has continued to grow.

A: Well, it was complicated, because of the way opinion was splitting. I was arguing for stronger support for high-performance sport and for a better national support system for non-elite sports and physical activity. I did a lot of running along Lake Ontario and thinking about that, I can tell you. The Olympics are full of contradictions because they involve multiple narratives, some very appealing and others not. I got to know [Montreal Mayor Jean] Drapeau and we would argue about this stuff. He would say, “I want what you want, but I don’t believe people in this country are willing to support a huge investment in sport. So the only way you can get it is a big idea to do a big thing. So, you need these Olympics, which will galvanize people.” These sorts of debates are still going on. The IOC has got to wrestle down the costs. And the high-performance community has to address the needs of other sports participants. In both the Olympics and pro sports, the high-performance people give off the impression that everything’s fine after COVID-19, when in fact participatory sport for the most part has been devastated. Already woeful lows in participation are falling like a stone, not just in first-world countries like ours, but across the global south, with a resulting loss in physical resiliency and mental health and so on. The number-one world health crisis is not COVID, but non-communicable diseases—cardiovascular, diabetes, mental health.

Q: What do you see in the future, something hopeful or more of the same?

A: I’m hopeful, but not confident. I would like to think that evidence about physical activity and non-communicable diseases, combined with the example of the middle and upper classes in societies like ours getting through the pandemic by walking, jogging, taking up bicycles and so on, will be persuasive for more of the population and decision-makers. But, sadly, there wasn’t a word said about that during the recent election, and it troubles me enormously that this, which should be a priority of population health, is not on the political agenda yet.

Q: What about the other end, the high-performance aspect? You think governments and corporations will keep pouring money in that direction?

A: There’s more and more skepticism about that. I don’t think that there would ever be a new domed stadium in Toronto. And I don’t know about Olympic bids either. They would have to be the capstone of proposals that would bring money for a major infrastructural renewal and promote sport for all. Then you might have a persuasive case. But simply as a branding exercise, I don’t think there’s a major city in Canada where there would be a majority of people who would support that bid.