Cairo To Constantinople: Francis Bedford’s Photographs Of The Middle East 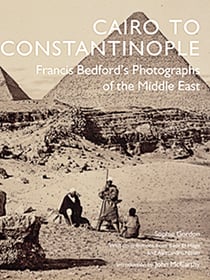 Less than two months after Prince Albert died, plunging his widow, Victoria, into a half century of mourning, she bade farewell to her eldest son and heir, Edward, as he set off on a four-month tour of the Middle East. Though Edward’s adventures are long forgotten, the visit’s true lasting legacy is a rare collection of more than 180 pictures, which captured an area rarely previously photographed. The commission to create an official pictorial record fell to Francis Bedford, a skilled photographer who’d prospered as the cutting-edge medium became the newest craze of Britain’s elite. The photos are enhanced by diary excerpts of those on the tour, including Edward.

To capture vistas that would dazzle London, Bedford played the royal card to the max, capturing palaces and religious sites normally off limits to outsiders. On April 1, 1862, he was one of the first photographers permitted onto the Dome of the Rock in Jerusalem; a week later the prince and his companions were the first Christians allowed into Hebron’s Tomb of the Patriarchs. In an era when Ottoman control of the region was weakening, the tour couldn’t help but witness signs of the religious and ethnic turmoil that plagues the region to this day. In Damascus, they saw the ruins of a Christian neighbourhood where thousands had been killed by their Muslim neighbours three years prior.

Upon Bedford’s return to London, the popularity of the tour and its images gave such a boost to his career that his photographs were embossed with the stamp, “Photographer to the prince of Wales.”