The U.S. president once said of the PM that he never wanted ‘to see that boring son of a bitch again’

The similarities between the John Diefenbaker—John F. Kennedy relationship and that of Stephen Harper and Barack Obama are striking. Both Diefenbaker and Harper were more conservative and scions of Western politics who clashed sharply with their liberal, urban-intellectual American presidential counterparts. Canadians have never paid much attention to the dynamics between Harper and Obama, but they are obsessed with the Diefenbaker–Kennedy relationship. Most Americans, meanwhile, don’t even know it existed. Asa McKercher’s book is a major contribution—and a major repudiation—of the existing scholarship on the relationship between Canada’s 13th prime minister and America’s 35th president.

McKercher outlines how, like Harper, Diefenbaker was often motivated by domestic political concerns when it came to foreign policy. Harper’s decisions to be the first G7 leader to fly to Ukraine post-revolution in 2014, to duck the Commonwealth Heads of Government Meeting in Sri Lanka in 2013 and to close the Canadian embassy in Iran in 2012 were all heavily motivated by domestic policy concerns. Harper made a point of reaching out to the Ukrainian, Jewish, evangelical, Tamil and other communities, in which he could gain votes by talking a good game on their favourite foreign policy issues. 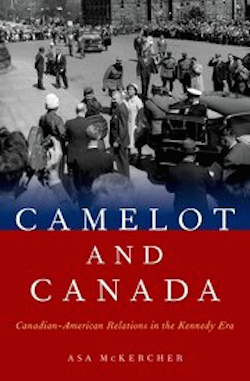 Similarly, Diefenbaker was motivated by domestic concerns when he began selling wheat to China despite the United States having no relations with the Asian country at the time. Opening wheat sales was hugely popular in the Prairies, where Diefenbaker derived much of his support. Similarly, Diefenbaker vacillated on whether to accept nuclear weapons on Canadian soil because of domestic opposition. McKercher takes a largely sympathetic view of the Kennedy administration’s actions toward Canada, regarding them as essentially friendly despite the personal antipathy between Kennedy and Diefenbaker. He challenges J.L. Granatstein and Stephen Randall, two of the elder statesmen of Canadian–American history, for unfairly criticizing Kennedy.

McKercher’s book also contrasts with more recent scholarship. John Boyko’s Cold Fire: Kennedy’s Northern Front, released in February, is a popular history with a far less nuanced analysis (but livelier writing) than Camelot in Canada. McKercher’s work is meticulously researched. He has a 22-page bibliography including 53 primary sources covering the Eisenhower, Kennedy, and Johnson administrations. It is the most thorough analysis of the Kennedy–Diefenbaker relationship yet. Camelot and Canada’s strength is in grounding the famous personal controversies most books dwell on (e.g., Kennedy mispronouncing Diefenbaker’s name when he visited Ottawa and saying he never wanted “to see the boring son of a bitch again” when Diefenbaker went to Washington) in the behind-the-scenes events that actually drove decision-making. McKercher has sifted through decades of half-truth and claptrap to produce an original and highly compelling analysis of the relationship.