From 2017: The As It Happens co-host, who helped the Aryubwals flee, says journalists need to think more about the people in their stories 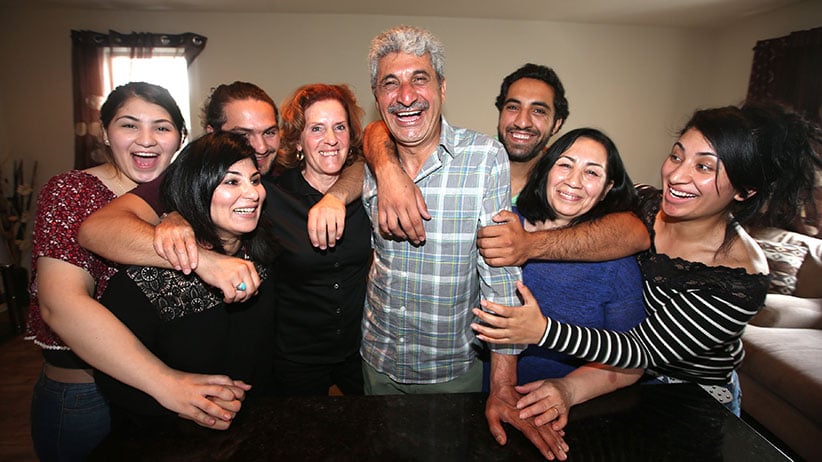 Asad Aryubwal(centre) poses with his family, Husna,16, Robina, Mujeebullah, 24, journalist Carol Off (who featured Aryubwal in her documentary about warlords who were working with the Americans and NATO troops to oust the Taliban) , Muhammad,26, wife Mobina and Hossai in their home. (Vince Talotta/Toronto Sta/Getty Images)

Carol Off is the co-host of As It Happens, CBC Radio’s long-running international news and interview program, and a veteran TV journalist. She’s also the author of several highly regarded books, including Bitter Chocolate: Investigating the Dark Side of the World’s Most Seductive Sweet, a finalist for the 2007 National Business Book Award. It adds up to a distinguished journalistic career, one that makes Off’s latest book, All We Leave Behind: A Reporter’s Journey into the Lives of Others, so striking a departure for her. It details the fate of Asad Aryubwal and his family after Asad’s on-camera interviews with Off about the continuing power and murderous crimes of Afghan warlords in the wake of the American-led NATO invasion of his country in 2001. The interviews brought death threats and years of terror to the Aryubwals as they struggled through what became a bureaucratic nightmare before they were accepted as refugees in Canada. Throughout the book, much to her discomfiture, Off is a central figure as she wrestles with her own responsibility for the Aryubwals’ plight, and the motives and ethics of journalism itself.

Q: This story is a good 15 years in the making, and you remain uncertain about its moral meaning. Would you agree with that?

A: Absolutely. It really goes back to when I first met the Aryubwals in 2002, just after 9/11, though I did not find out that they were in trouble until 2007. I’ve been wondering ever since what is the lesson I’ve learned? I still don’t know what that is, or what I now think about the profession I’m in. I still completely believe in that profession and I would challenge anyone to a duel if they tried and tell me that it’s not a valuable part of our society. But I don’t know what my responsibilities are.

Q: Your story is particularly relevant for foreign correspondents.

A: There’s no one to challenge you. I mean, we do a story in Canada and we get it wrong, someone’s going to call you. In some remote place people have really no recourse—they are extremely vulnerable.

Q: That’s essentially what happened, isn’t it? You report a story in which an honest and courageous Afghan man says things of public interest on record. It’s a good day for you. It turns out to be a bad day for him. Everybody ends up questioning their decisions.

A: That’s very accurate as a plotline, yet it’s not just any man. Asad is a man with faith and belief in something larger despite the fact he had nothing to base that on, being an Afghan and having seen his country in decades of war, but for whatever reason he believed in a better world. So he believed when he met me that talking to journalists was part of this new world and he thought he had a role and a contribution to make. I think a lot of this has to do with character.

Q: Asad is who he is. If he were somebody else, do you think the story would have come out the way it did?

A: No, and not if I were somebody else. The story is informed by the kinds of people we both are. There were so many other times when I saw people in distress and thought, “How can I leave them?” But I have to, I’ve got to get out of here. And I don’t go back, I don’t return. I may have put a phone call in, I may have thought about them, but I didn’t go back. In this case, though, it was a man of such tremendous honesty and integrity who just captured something in me—and not just him, but his extraordinary daughter, Ruby. She spoke English, and it was her ability to let me know what he was thinking and to understand them all better that really drew me into their orbit.

A: No, I thought everything was cool: great story, great get, great character—TV journalism talk. You win an award, CBC is thrilled, they sell the piece to other countries, everything is good. And then you start to look over your shoulder.

Q: Because Ruby kept in touch?

A: Yeah, and she was 14. She is a remarkable figure, a formidable woman now. She turned 30 this year.

Q: You return to Kabul more than four years later and ask Assad if he wants to comment on what changes he’s seen. He tells you he’ll talk on camera, but he doesn’t mention any of the threats he’d received after the first time. If he had, you write, “I would not have asked for a second interview.” Would that have been something new for you?

A: No, that would have been standard.

Q: So you had not already changed your thinking?

A: Not at all. It’s a difficult question because sometimes you ask people if it’s safe and they say it is. And I’ve suspected it’s not, and I’ve said I’m not doing it. I don’t know if everybody does that. What changed from the past is I would have been more likely to take them at their word. Now I don’t. I decide. And even if people tell me they want to do it, if I don’t think that they’re safe I will not. All the time at As It Happens we find somebody, someplace, and I say, “No, we’re tearing this down. I don’t feel confident that we can protect this person.” My sense of what my responsibility is has definitely expanded.

Q: This new sense came from the aftermath of your second interview with Assad. When he faced renewed threats you felt that responsibility?

A: I felt responsible because I was responsible. I put the family in this situation. And I had the responsibility to get them out of it.

Q: But that conviction quickly spread out from the Aryubwals, didn’t it? Most notably when you arrived at a poppy farm and immediately, for reasons not entirely clear to you then, felt “queasy.” You opted to not do the interview, a decision that annoyed everybody around you—your crew, the local fixer who arranged it—all thinking, “Here’s a great story, so why are we shutting down?” What was happening in your mind?

A: I was losing my nerve. I just had a moment when I saw this incredibly vulnerable poor farmer and I realized that over time you develop the skill to get people to say things. Years ago I saw a journalist interview Benazir Bhutto and just open her up with the questions. I thought, “Man, I want to learn how to do that. I want to learn how to crack somebody, be like a key that goes into a lock and opens them.” Be careful what you wish for, because you do get to be good at that. And now I’m thinking, “This poor rube doesn’t know how to protect himself.” We’d gone to all this trouble and expense to do the piece, to the point our standard of making sure we’re not putting someone in danger was probably pretty low, because we needed to get the story and get out. And I couldn’t feel confident that he’d be safe.

Q: You had Assad on the back of your mind.

A: I absolutely did. The Asad interviews changed me for sure.

Q: When you decided to help the Aryubwals, it must have seemed like it would be a slam dunk, in terms of refugee status? They were in trouble for being the sort of Afghan citizens we want to see flourish. But it didn’t turn out that way.

A: A man risks his life to warn Canadians against something that he thought was going to endanger our mission there. He did it a second time, knowing that he was already in trouble. He spoke to the public broadcaster, to the CBC, to warn the Canadian public. And his life was destroyed because of it. So I thought, “Well that’s pretty obviously the right person for asylum.” But it took years and often seemed like it would never happen.

Q: You began to worry about being a liability to the family.

A: As It Happens was being very hard on the federal government on its refugee policies—[then minister of citizenship and immigration] Chris Alexander became very angry in an interview and hung up on me. And here I am trying to help a family of refugees come to Canada. Yes, I began to worry.

Q: That was not the only point where you were concerned about you becoming the story.

A: That was the hardest part of writing the book. I was barely in the first draft, and then my editor said, “No, no every time, you poke your head above the ramparts and put yourself in it, it comes alive in a way that it doesn’t otherwise.” Being a very, very traditional journalist, the idea that I step out from behind the curtain was extremely difficult. But I rewrote the book with me in it. Now I’m dealing with talking about me and my feelings.

A: On one hand. These people are of my family now. I love them. They’ll be with me for life, unless they decide they hate me. I will see them marry, I will see them have children. And what a rich thing that is. But I created this horrible thing for them and I robbed them of a decade of their lives, lost in an exile that they can’t get back. So, yeah I do regret that I did that. Ten lost years.

Q:  Do you think journalism needs to change?

FILED UNDER: Afghanistan As It Happens Asad Aryubwal Carol Off Editor's Picks journalism The Vault