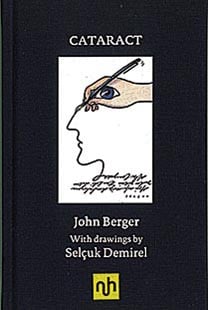 Despite having lived in France since 1962, Berger, 86, remains one of the pre-eminent English men of letters of the past half-century—a novelist (author of G., winner of the 1972 Booker prize), poet and art critic whose Ways of Seeing is a standard university text. Berger is also a stalwart leftist iconoclast—Ways of Seeing, which accompanied a BBC series, was written as a class-conscious riposte to Kenneth Clark’s upper-crust Civilization—and a committed collaborationist on many of his projects. Much of Berger’s past life thus seems present in his newest book, a slim volume (67 pages) containing the poignant thoughts of an art critic once again blessed with sight, and made aesthetically pleasing by exquisite line drawings by Turkish artist Selçuk Demirel.

Surgeons removed the cataract—from a Greek word meaning waterfall or portcullis (that is, an obstruction that descends from above)—in Berger’s left eye first, giving him two distinct fields of vision, depending on which eye he closed. What “my left eye tells me,” Berger writes, is that “on whatever it falls light bestows a quality of firstness, rendering it pristine.” That leads to some comments on the metaphysics of light, how travelling at lightspeed means leaving behind “the temporal dimension,” which in turn prompts one of Demirel’s most arresting images: a man lying on his side, with an occluded right eye and a left eye that has become a rocket ship blasting into space.

The operations brought back blue, “the colour of depth and distance,” with a power that surprised and delighted Berger. The entire effect, he writes, is like awakening in a Vermeer painting, The Kitchen Maid, perhaps. He feels like he’s looking at the objects in it, the bread on the table, the bowl into which the maid is pouring milk, and “the surface of everything is covered with a dew of light.” It’s an apt reference: no one ever painted light better than Vermeer, and Berger knows how lucky he is to see it again.