Catherine Leroux: 'No part of my life is immune'

Catherine Leroux on when a novel begins and ends, the shock of translation and the meaning of a blank look 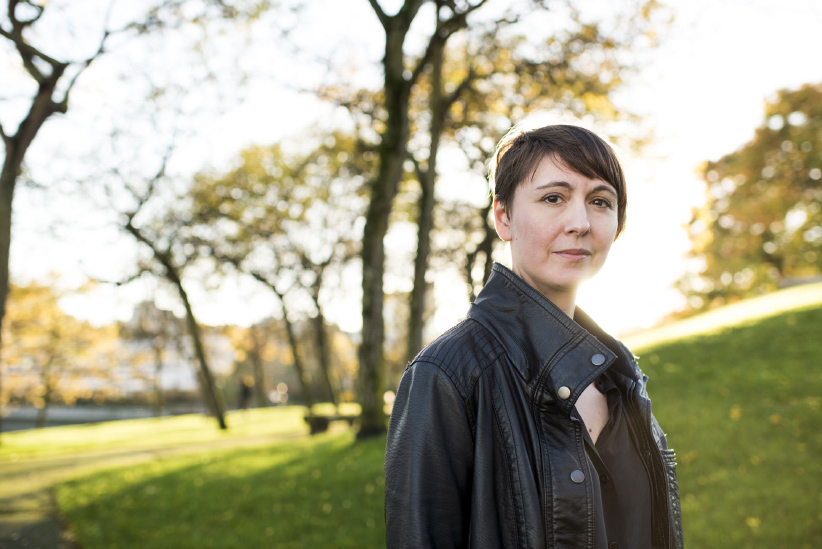 The 2016 Scotiabank Giller Prize: Canada’s most distinguished literary prize awards $100,000 annually to the best Canadian novel or short-story collection published in English. In this series, Maclean’s highlights the artistic process of the six nominees. Here, Catherine Leroux discusses the strangeness of truth, and the duality that marks her shortlisted novel. Read more from other Giller Prize nominees here.

“It’s like walking into your home and finding some psychopath—not that Lazer is a psychopath—has rearranged all your furniture, moved all your stuff. It’s eerie,” says Catherine Leroux. The 37-year-old Montreal writer is talking about the experience of being translated into English for the first time, a task accomplished with spectacular elan by Lazer Lederhendler: Leroux’s novel The Party Wall is shortlisted for the Scotiabank Giller Prize and the translation is up for the Governor General’s award. It’s the second year running that a translated French-language Quebec book, both the work of the innovative Biblioasis publishing house, of Windsor, Ont., has received a Giller nod.

The nomination has put Leroux on the road in English Canada, where she had no expectation of readership or sales, travelling with the Giller cavalcade and reading from Lederhendler’s strange-but-familiar version of her own words. Strange but familiar describes the original too: four linked stories—Leroux calls The Party Wall a novel, despite a self-confessed inability to “commit to one character, one plot”—that began life as “things I heard on the radio or read in the news in 12 years, true stories I put away for use in novels until I realized they all had something in common.”

MORE: Read an excerpt of The Party Wall here

The link, she says, was “duality, siblinghood”: a brother and sister search for their father; a woman discovers that she absorbed her twin sister’s body in the womb; one sister makes a huge sacrifice for another; and a prominent couple in a dystopian future learn that they are non-identical twins separated at birth. “All the characters have different levels of distance between them,” she says, “and with [twins] Ariel and Marie, the wall is a bit too thin.” The surreal is grounded in the real, she says. The story with most ordinary events, “the one with the least shock factor,” laughs Leroux, “is the one entirely from my own imagination. Truth really is stranger than fiction.”

BY CATHERINE LEROUX · People want to know how long it took. Two years, I tell them. I’m not sure what they do with this information. Maybe they superimpose it on their own schedules, as a way to plan the time they should take to write their own books. Maybe they use it to calculate an hourly wage, to see how much writing a novel pays. (I don’t recommend doing this.)

Two years is the amount of time between the moment I wrote the first word of my novel and the point when it was sent to print, so that’s the answer I give. One needs to draw a line somewhere, the same way we’ve agreed that children become adults at 18 years old and territorial waters extend 12 nautical miles beyond the coast. We put arbitrary, invisible boundaries in the chaos of waves and salt, of hormones and dreams.

The truth is, I don’t know when it started. I don’t understand where it ends. It began a decade ago, when I heard a story so sad, romantic and strange I just had to take it and save it for the day I’d be capable of turning it into a book. It began when I was a teenager who saw everything in black and white, an obsession with dualism that followed me into adulthood. It began 17 years ago when I hitchhiked through the United States. It began in CEGEP when my professor said something about reality being crazier than fiction. It began when I was a kid, leaving a penny on the train tracks.

And there isn’t really an end. I am no longer in a position to modify the book (although I sometimes forget that when I’m reading a passage, and I find my hands twitching as if I could touch the iPad keyboard and erase a word on the page), but it is still changing, in my mind, in the way I think about the characters, in the way I view the storyline. It takes on a different shape every time a new person reads it; it went through an entire revolution when it was translated. It looks different as our vantage point shifts, as our reality evolves.

It took me a while to realize that a book never becomes immobile, and to accept that its creation starts long before it is typed. To know that this sometimes unconscious phase is probably the most important.

No part of my life is immune from this passive writing; it creeps in everywhere. It has invited itself to family dinners, on hiking trips, during breastfeeding and into classes. Ideas for entire books appeared during parties, and new characters formed while I was vacuuming. But most of the time, it’s a quiet, constant mulling, like a low hum underneath the other sounds.

Sometimes, when the people I love talk to me, they might see a blank look on my face. I don’t realize it while it happens, but I know it does and I feel bad. I can decide when to sit at my computer and write. But I have no power over the other part of the work, the same way the Coast Guard can’t monitor the coming and going of fish in and out of the 12-mile limit.