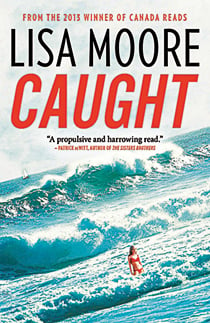 The naïve courage of youth is something understood by those who are no longer young. Second chances seem infinite—until, of course, they’re not.

Moore’s novel opens with twentysomething David Slaney having just busted out of jail, with a mind to finish his previously botched cross-border marijuana heist. But before Slaney can finish the job, there are obstacles. He’s got a detective on his tail, an unrequited love gnawing at his psyche and one massive gamble: smuggling bales of dope on a boat from Colombia to Canada with a middle-aged drunkard and his interfering chippie as a couple of sunbathing liabilities.

The author’s first published works were short story collections, and that very specific style is evident in her prose. She is a master of the powerful, economical sentence; those one-two-punch observations are dotted all through this book ready to lay you flat with their keen distinction. Sometimes, the novel can read more like vignettes on a theme rather than a living, weaving plot where the connections and motivations are more fully developed. But Moore’s ability to capture moments—of revelation, of observation, of dialogue—is so strong she can get at the heart of large ideas in an instant.

For a suspense novel, it can lack suspense. It’s hard to feel sustained tension for a con on the lam who is alert but not suspicious. It’s Patterson, the detective who infiltrates Slaney’s crew, who commands more sympathy. His career and confidence could use a boost and you find yourself hoping he makes good.

Though Moore may sometimes miss her intended mark, the result is still thrilling. This is an author who grips you with her impeccable use of language. The novel walks a great line between paperback levity and psychological intelligence—exactly what you want in a summer read.