Book Review: Naked Statistics: Stripping the Dread from the Data 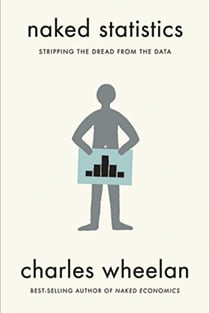 Wheelan’s earlier book, Naked Economics: Undressing the Dismal Science, is regarded as one of the best—and most readable—introductory texts on the subject. A former U.S. correspondent for The Economist who now teaches at Dartmouth College, Wheelan skilfully cut through all the jargon and graphs to demonstrate that economics is really about people and their behaviour. Now Wheelan is attempting to demystify another important, but equally tedious-sounding field: statistics. As Wheelan points out, the inferences made from statistical data underpin much of modern life, from the movie suggestions delivered by Netflix to your chances of developing heart disease. They are also easily misunderstood, manipulated or, in rare cases, plain wrong. But how many of us know enough about stats to tell?

In a bid to explain both the power and pitfalls of statistical analyses, Wheelan draws on engaging examples that range from sports to game shows. They include: why marketers of Schlitz beer were willing to subject their brew to a blind taste test among 100 fans of a rival brand in front of a Super Bowl audience (most beers Schlitz competes with taste the same and, with a large enough sample size, roughly half of tasters were likely to pick Schlitz regardless of their stated preference); and a discussion of what’s come to be known as the Monty Hall problem: should Let’s Make a Deal contestants, faced with three doors, one of which hides a car and two that hide goats, opt to change their selection after the host reveals a goat behind one of the two doors they didn’t pick? (Yes, Wheelan argues, because the chances of winning jump from one-in-three to two-in-three.)

Still, the book feels far more dense and textbook-like than Wheelan’s previous work. It may well be that, unlike economics, which is sometimes described as a “pseudoscience,” statistics is necessarily more math-like. But given the increasing importance of stats to our everyday lives, odds are it’s worth the extra effort.