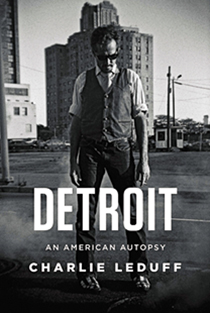 Newsflash: Detroit is a mess. It’s been a mess for a long time, and will continue its slow circle of the drain thanks to corruption, greed and racism so ingrained and institutionalized that it’s almost a collective reflex amongst whites and blacks alike.

Such is the background for LeDuff’s uniquely bleak parade of human misery through Motor City. A Detroit native himself, LeDuff returned home after an acrimonious split with the New York Times. Ensconced at the Detroit News, he began to write the stories that serve as the basis for his book. A seven-year-old girl who is shot and killed in a botched police raid; a mayor who rides his Escalade through the ruins of his city; firefighters who can’t extinguish a blaze in their own firehouse because of budget cuts; a hopelessly corrupt city council woman with a charming smile and bulging breasts; cops in porkpie hats; a dead body encased in ice: LeDuff revisits them all and his own family, a suitably hardscrabble collection of ne’er-do-wells. (His sister was a hooker, one of his brothers polishes screws for a living.)

LeDuff, a Pulitzer Prize winner, has a tendency to lay it on a bit thick. He seems almost ashamed that he writes, rather than punch sheet metal, for a living. And his evident scorn for his snobby former Times editors is too frequent a distraction. But his narrative, like the city itself, is compelling and tragic. You get the feeling that the tufts of Detroit’s renewal—downtown’s Renaissance Center, around midtown’s Wayne State University, among others—will remain just that: tufts, blowing helplessly in a city that gave up hope a long time ago.