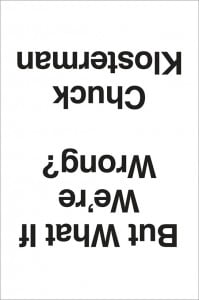 BUT WHAT IF WE’RE WRONG?

What if in the centuries to come, the best-known author of our time turns out to be an unknown genius currently toiling away in the Deep Web? What if the United States should become a failed state precisely because of the freedom enshrined in its Constitution? And what if we were to find out that Elon Musk is right, and we’re all living in a computer simulation of reality—and God is actually Brenda, “a middle-aged computer engineer living in the year 2750”?

These questions may seem outlandish, but Chuck Klosterman makes them constructive in this contrarian’s guide to rethinking not only our expectations for the future, but also our understanding of present-day life. Most people, he contends, are naive realists who believe that the future can be extrapolated from the data we have now. But we’re always acting on incomplete information. Our understanding of life, the universe, and everything, is likely to be misguided, which explains why historically, sweeping predictions are almost all dreadfully wrong.

For Klosterman, “the future is a teenage crackhead who makes shit up as he goes along.” So the best way to imagine how it may play out is with a series of thought experiments designed to question the continued existence of all that we take for granted, whether it be the literary canon or the National Football League. Klosterman is at his nerdy best here; with his varied resumé, including the’90s metal memoir Fargo Rock City, ESPN sports punditry, and the “Ethicist” column for the New York Times, he has the range, the irreverence, and the nit-picking analytic tools to probe the structural stability of the pillars of our world view. His well-known tendency to navel-gaze is curbed by interviews with experts and artists from a tetchy Neil deGrasse Tyson to a stoner philosophy-espousing Richard Linklater, who engage with the loopy and/or mind-blowing ideas Klosterman derives from conspiracy theorists and revered thinkers alike.

It’s striking how open these public intellectuals are to having their ideas steamrolled by posterity: David Byrne postulates that down the line, obscure recordings and “commercial crap” will unseat the artists he loves; physicist Brian Greene speculates how even space and time, concepts fundamental to our understanding of the universe, could one day be considered irrelevant.

Not that anyone really has a clue: the “Klosterman’s Razor” concept argues that any scenario that is actually imaginable by our tiny brains—including those in the book—will never, in fact, come to pass. The future is fundamentally unknowable. So does it matter? Maybe not—but the radical critical thinking the book urges is certainly valuable, if only to enrich our insignificant little artificial lives, praise Brenda.