Book review: Nuclear Weapons, the Damascus Accident, and the Illusion of Safety 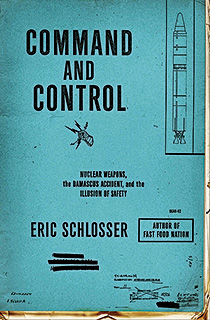 Command And Control: Nuclear Weapons, The Damascus Accident, And The Illusion Of Safety

This book is, honestly, a bit of a mess. It is, basically, an attempt to assess how close the United States might have come to suffering an accidental detonation of nuclear weapons during the Cold War. As the title implies, however, questions about the ever-changing chain of authority for launching nuclear weapons are mixed in with the less familiar safety narrative. And this overall survey is intercut cinema-style with a minute-by-minute account of perhaps the most hair-raising of U.S. weapons accidents, the September 1980 fire in a Titan II missile silo near Damascus, Ark.

One is left with the impression that the story has holes: certainly Schlosser must wish he could have devoted more time to the zany Wild West environment in which private contractors developed hypergolic missile propellants. Rocket fuel ended up wreaking a lot more havoc than warheads did over the course of postwar history—especially in Damascus.

But Command and Control will rightly be a huge hit. The story of Damascus is the most exciting material of any kind you are likely to find on the shelves this fall. And this isn’t just another fine writer’s scraping of existing lore for mass-market bucks. Schlosser, author of the celebrated Fast Food Nation, has made major inroads into unpublished and classified Cold War history, inroads that professional scholars are already applauding.

The history of nukes isn’t easy to tie up in a neat, orderly package. It is a grand melee of math nerds, power-hungry generals and frightened politicians. Schlosser does not overlook the awkward fact that, so far, it has all worked—that the embarrassing, ad hoc ways in which we store and police nuclear weapons may have been nearly the best possible arrangements under Cold War circumstances. There are no cheap world-gone-mad metaphors here, nor even much explicit drumbeating for further disarmament. Just the facts.