Correcting the record on the Salem witch trials

The Witches presents a a new, nuanced narrative 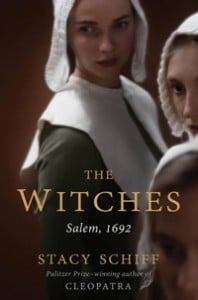 The Salem witch trials occupy a big space in the cultural imagination as spectacle and metaphor, yet many facts remain distorted. Men were among the more than 100 accused and incarcerated over eight months in 1692; five, including a minister, hanged, along with 14 women (two “demonic” dogs also perished). Rich and poor were accused; no one was burned at the stake.

Stacy Schiff’s masterful, engrossing chronicle of mass delusion in 17th-century New England rights these misconceptions and more while erecting a new, nuanced narrative of a time for which little written record exists. “New Englanders, by nature maniacal record keepers, made exception for 1692,” she notes. Humanizing accusers and accused, and deftly contextualizing colonial and sexual politics in Puritan America, Schiff’s version is even more horrific and heartbreaking.

The acclaimed biographer, whose books include studies of Vera Nabokov and Cleopatra, evokes a claustrophobic, paranoid Salem, a joyless stratified society where citizens lived in the dark, literally and figuratively. News was unreliable. Fear of assault by disease or Indians was ever present; political stability was elusive, with a charter under construction. This insular society tended toward fissures, factions, and litigation. Thirst for meaning introduced an obsession with causality; for Puritans, Schiff writes, “a comet was never simply a comet.”

In such a climate, allegations by a band of teenage girls could yield mass hysteria. (“It is hard to name another historical moment so dominated by teenage virgins,” Schiff writes.) Neighbours and families turned on one another. The grotesque allegations raised —women hurtling through the night on brooms, enchanted hay, demonic cats, teenage girls convulsing in court—summons a Marc Chagall painting drained of colour.

Schiff’s exhaustive account of wilful blindness and human treachery can be exhausting, even claustrophobic, to read. When skeptic Thomas Brattle enters in the fall of 1692 to debunk the insanity, he’s welcome relief. Throughout Schiff deftly alludes to America not learning from Salem, most glaringly in McCarthyism but also in response to terrorism. When she writes, “Salem endures not only as a metaphor but as a vaccine and a taunt,” it’s understood this inoculation is far from complete.