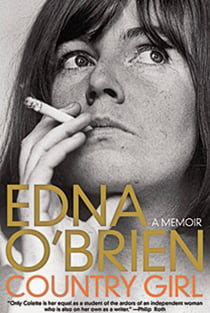 Irish writer O’Brien’s first novel, The Country Girls, was written in three short weeks. It poured out of her from the safe distance of her London digs. The sexually explicit story of two Irish girls coming of age was set in the 1950s and published in 1960. Public reaction back home in County Clare was swift and merciless. The Irish censor banned the book, O’Brien’s parents were ashamed and the parish priest burned it. The die was cast: Ireland had given birth to its first heretical female scribe. (Irish poet Thomas McCarthy has since dubbed O’Brien the “Solzhenitsyn of Irish life.”)

In this lively and lyrical memoir, which took three painful years to write, O’Brien outlines her life story with the mordant detachment of a trained observer and the eloquence of a novelist. O’Brien, who once told an interviewer that “unhappy houses are a very good incubation for stories,” proves her maxim as she tracks her bumpy journey from country girl to Chelsea matron.

The most compelling material in the first half is her elopement with writer Ernest Gébler. As marriages go, it was a Shackleton expedition. Gébler, less than thrilled with The Country Girls’ success, proclaimed his wife’s talent “resided in her knickers.” That didn’t stop him from cashing her publisher’s cheques.

O’Brien remained with her tyrannical husband until 1964, when she walked away, friendless and penniless, straight into the heady scene of 1960s London, where her Chelsea perch became a popular party stop on Saturday nights. Free from parental and marital constraints, she dropped acid with R.D. Laing and dated Robert Mitchum. Paul McCartney sang her two boys to sleep and Jackie Onassis was a confidante.

As a reader, you can’t help but root for O’Brien as she successfully shakes off her suffocating girlhood and gleefully seizes her independence. Like many exiled Irish writers, O’Brien thrives at a distance yet still embraces her rich home country as muse.