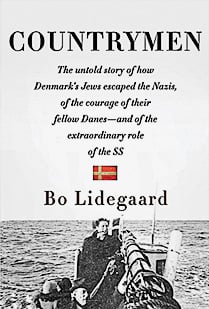 Countrymen: The Untold Story Of How Denmark’s Jews Escaped The Nazis

If there is a bright spot in the horrific story of Europe’s Jews under the Third Reich, it has always been the mass escape of Denmark’s Jewish population from the Nazis’ final solution. In his opening pages, though, Lidegaard—a diplomat, historian and journalist—seems to raise the disturbing possibility the story shines brighter than it should. The long-standing belief that King Christian X wore the yellow Star of David about Copenhagen—proclaiming himself a Jew and daring the Nazis to dispatch him to a concentration camp—is untrue. But Lidegaard has only cleared away that myth to open the door to a story more subtle, believable and, in the end, more uplifting than the original.

Even under German occupation, the Danes, Jewish and otherwise, operated from a position of relative strength. The mainly Lutheran population overwhelmingly believed that Jews were not some alien presence amongst them, but fellow Danes of another religion, not to be subject to laws that singled them out. And Denmark was the Nazis’ model protectorate, a propaganda showroom for how lightly they would control postwar Europe. (Practicalities mattered too: Denmark was a major source of food, and a mere 20,000 troops policed the occupation, compared to the 400,000 required to hold down Norway under direct military rule.) For both those reasons, King Christian, who did declare his willingness to wear a yellow star if such an order came to his Jewish subjects, never had to do so: no one in Denmark was ever required to don the star.

But the Nazis’ rabid anti-Semitism couldn’t be bottled up forever, and Berlin issued orders for an Oct 1, 1943, round-up. Forewarned by Danish officials and benignly ignored by Danish police, the country’s 7,000 Jews headed for the coast, where other Danes managed to stuff 6,500 of them into boats of all kinds and safely ferry them to neutral Sweden. It’s not quite that simple, of course. There are plenty of twists and turns in Lidegaard’s remarkable story: including considerable help from German officials who, seeing the tide of war turning against them, either did not want to face postwar justice or did not want to further alienate the population. But the essence remains: the Danes simply refused to turn on themselves.