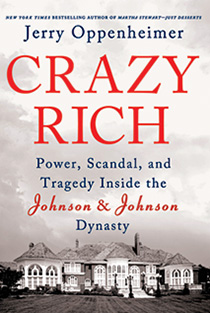 Few can resist titillating tales about the rich and famous. Better yet if biographical subjects are also tragic, providing schadenfreude for the mere mortals consuming such fare.

Such is the case with Crazy Rich, which depicts the often unenviable lives of multiple generations of the Johnson & Johnson business empire, best known for selling Band-Aids and baby powder.

Oppenheimer writes with relish about the charter members of the Lucky Sperm Club at J&J (yes, he uses the term at least once). A typical J&J heir receives a $10-million trust fund at age 21, with more money staggered over the decades in case the early instalments are blown. Too often, though, the money outlives the inheritors.

Three don’t make it past age 30, succumbing to fast cars, drug overdoses or, in the singular case of Casey Johnson, a party buddy of “celebutantes” like Paris Hilton, a combination of diabetes and mental illness.

The author sketches the history of J&J’s founding in 1877, but it is not until the company goes public in 1944 that the descendants of the original three brothers become filthy-crazy rich. As they do, wariness sets in about outsiders marrying into the clan solely for their loot, with a healthy trade ensuing in pre-nups. Divorce and estate squabbles are the fate of those who make it to middle age.

Oppenheimer interviewed survivors, lovers, exes and former business partners. However, he was not granted an interview with the family patriarch, who is the book’s central protagonist: Robert Wood “Woody” Johnson IV, great-grandson of one of the founders. He’s among the happier, less-crazed subjects profiled, successfully fashioning an identity beyond the J&J dynasty by becoming owner of football’s New York Jets.

Woody is depicted as believing money solves all problems, though the millions he donated to the John McCain and Mitt Romney presidential campaigns could not buy him political happiness. Feeling better already?