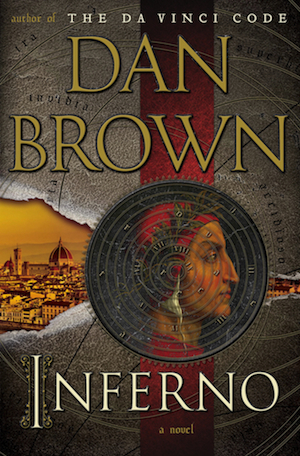 Dan Brown’s latest suspense novel, Inferno, was released today, in what one critic called his “worst book” so far. Other reviewers have been only lukewarm about the book.

This means, of course, that the latest adventures of symbologist Robert Langdon, as chronicled in Inferno, are sure to make the book an immediate best seller.

Here’s a sample of the tepid reviews from critics about the latest offering from the author of Da Vinci Code:

…where once he was abysmal he is now just very poor. His prose, for all its detailing of brand names and the exact heights of buildings, is characterised by imprecision. It works to prevent the reader from engaging with the story. This mattered less in his previous novels, but with Inferno I sense for the first time that Brown is aiming at a tauter, better book, one more interested in the real world, longing to escape from the prison of his pleonasm.

But in the end this is his worst book, and for a sad, even noble, reason – his ambition here wildly exceeds his ability.

…the book’s musty passageways seem to be not so much holding history up as sagging under its weight. Narration appears lifted from a Fodor’s guide, as when Langdon pauses in the middle of a life-or-death escape to remember the history of a bridge: “Today the vendors are mostly goldsmiths and jewelers, but that has not always been the case. Originally the bridge had been home to Florence’s vast, open-air market, but the butchers were banished in 1593.” It’s like trying to solve a mystery while one of those self-guided tour headsets is dangling from your ears.

From The New York Times:

One of the first characters to appear in “Inferno” is a spike-haired, malevolent biker chick dressed in black leather. She looks like trouble in more ways than one. What is the girl with the dragon tattoo doing in Dan Brown’s new book?

From The Financial Times:

Inferno reads less like a novel than a “treatment” for a thriller film…Luckily for Langdon, the doctor who is on his case – having evacuated him from hospital in a high-speed car chase and hidden him in her apartment – then changes out of her medical clothes. Dr Sienna Brooks “was transformed – a natural beauty – having changed into formfitting jeans and a cream-colored sweater”. What a stroke of luck; she could so easily have turned out to be a bit dumpy or plain. Even better luck that the next 200 pages consist of a chase through Florence, moving on to Venice and finally Istanbul.

From The Guardian (in which reviewer Steven Poole adopts Brown’s breathless and adverb-heavy writing style):

The tall writer began to analyze the blockbusting novel using his close knowledge of conceptology, the famous discipline about thoughts. He saw instantly that the stout book was brilliantly engineered. Its vivid paragraphs were short. Its establishing shots were cinematic. It repeated adjectives and explanatory phrases from one paragraph to the next, perhaps to jog the dulled short-term memory of the tired long-haul flier. It made art and poetry seem glamorous, and mixed them with luxury tourism and scenic chases. It spoke with the seductive urgency of a good-looking someone telling you a brainy secret.