David Sedaris on drugs, lunch, and comedy's role in politics

David Sedaris’s new book, Theft By Finding, is made up of diary excerpts chronicling acid trips and life in Paris 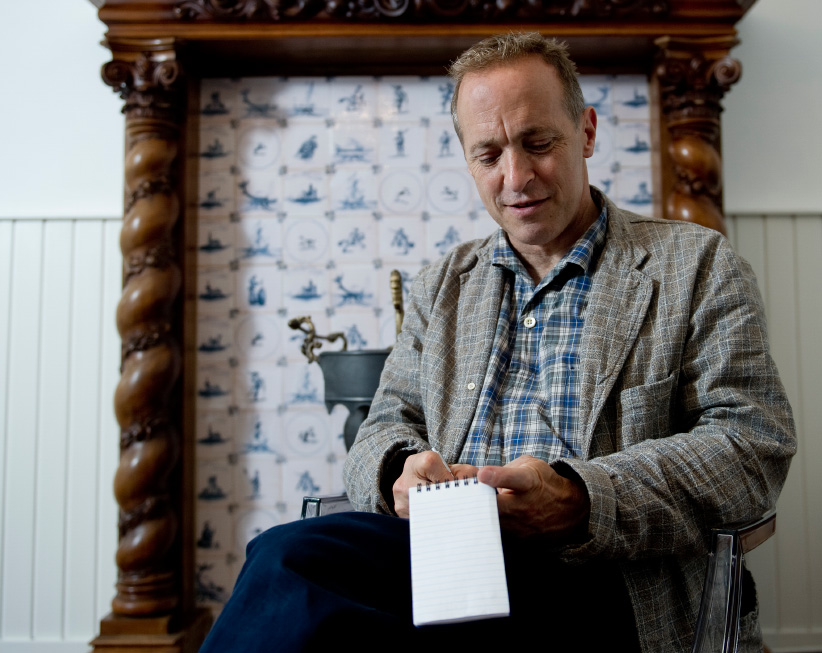 Bestselling author and radio personality David Sedaris has an unmistakable voice. This is true both ﬁguratively (his short ﬁction and personal essays reveal a biting, darkly funny, richly detailed and slightly absurd vantage on everyday life) and literally. It is pitchy, nasal, simultaneously stern and a bit fey, given equally to aggravated cursing and old-timey exclamations like “Oh, golly!” so that reading David Sedaris without hearing David Sedaris becomes an impossibility.

Sedaris emerged into the public eye in the early ’90s with “SantaLand Diaries,” a story he read for NPR detailing the time he served working as an elf at Macy’s during the holiday rush. His subsequent collections of stories and essays—among them Barrel Fever, Naked, Dress Your Family in Corduroy and Denim and When You Are Engulfed in Flames—earned all manner of critical accolades, with Sedaris frequently being cited among the ﬁnest living American humourists.

His latest book, Theft By Finding, is made up of excerpts from a personal diary he’d been keeping since 1977. It gives a sense of Sedaris’s comic voice emerging over time. Ironic, self-deprecating and shot through with druggy humour and keen, almost flippant insights into the banalities of American (and Parisian) existence, Theft By Finding presents an authorial imprimatur that pleasantly squares with Sedaris’s distinctive, immediately recognizable timbre. Both on paper and over the phone from South Carolina, where he is in the middle of a tour to promote the book, Sedaris exerts a charming allure of dorky-cool, like a buttoned-down public radio host who’s secretly having way more fun (and almost certainly dropping way more acid) than you.

Q: One thing that struck me immediately, especially in the early sections of your new book, is how much LSD you seemed to be doing. And not in some clichéd psychedelic way. You just seemed to drop acid and hang out, or tidy up your apartment. What drew you to psychedelics?

A: Oh, golly! I don’t think I ever took acid more than once or twice a week. There were people I knew in high school who would take acid two days in a row. And I never did that! I dunno. Don’t kids do drugs like that now?

Q: I’m not really sure. But my sense is that LSD is not so popular anymore. People are more into ecstasy and party drugs.

A: I was more into nature drugs. You would take acid or you would take mushrooms and you would go be with nature. There were a couple times in the book where I didn’t have a plan, where someone would say, “Hey you wanna take some acid?” and I’d say, “Okay!”

Q: Do you think those drugs attune you to the absurdities of everyday life, which you seem drawn to in your writing?

A: I think they attune you to nature, and to beauty. I don’t think acid attunes you to absurdity at all. Probably just the opposite. Other drugs, I think, do. Marijuana does, much more than any kind of psychedelic drug.

Q: A few years back, you had a piece called “What’s Funny About America,” where you discuss how you notice things about your home, or your nation, when you’re away from them. In your recent book tour, or your travels in the past, have you noticed anything strange about Canada that people up here seem totally oblivious to?

A: Did you ever notice how early you eat lunch? You start eating lunch at 11:30. But by two lunch is ﬁnished!

Q: What’s a sensible lunch hour, in your opinion?

A: A sensible lunch hour is 12 until at least three. I was in Montreal a few weeks ago, and at two o’clock, not even two o’clock, I went to the hotel dining room and they were ﬁnished serving lunch. That was bulls–t. I don’t know what time you guys get up! And it’s not just Montreal. From one end of the country to the other, you guys all eat lunch really early.

Q: Living away from America for so long, in Paris and now the U.K., and returning to America, what do you think of, let’s say, the “current state of affairs” in terms of politics, culture and daily life?

A: [I live] in England now, so I had Brexit and Trump within one year. All my friends in France last week were like, “Naw, we’re not going to vote in the ﬁrst round of elections. We’re going to wait until the second round and then vote.” Have you learned nothing?! “We don’t love any of the candidates.” It doesn’t matter if you love them! Oh my goodness!

But the good thing is, normally in England they’d be giving me so much grief about Trump. You wouldn’t believe the level of self-righteousness. All the years that Bush was in ofﬁce, all the s–t I had to put up with. Now they can’t say anything. I guess there’s a cold comfort in that.

Q: You hear a lot these days about the function of humour. “We need humour more than ever!” and all that. Can humour have a political imperative, or an ability to rattle people awake? Or do people tend to preach to a choir?

A: I think people are so divided that the idea of, let’s say, a Republican comedian making me look at myself and realize, “Oh my god, he’s right! I am really kind of a clown!” I don’t know if that really… people seem so polarized now. I don’t think they give comedians from the other side their ear. I have this thing I’ve been reading on this tour, and even if you’re a Trump voter, I don’t understand how you’d be upset by it. I mean, he ran as an asshole. Proudly! So when someone calls him an asshole it’s like, “Yeah. That’s what he is. He told us as much.” And I read a story about this on the tour, and people get mad and storm out of the theatre. I don’t understand it.

Q: It would never even occur to me that there’d be a single Trump supporter in your fan base. But I guess a lot of people voted for him.

A: What happens a lot is a woman will come up to get a book signed and I’ll ask her who she came with and she’ll say, “My husband.” Then she’ll point and there’ll be some guy leaning against a column, frowning. It happens every night.

Q: A word that’s commonly used to describe you and your humour is “wit.” You’ve been compared to people like Mark Twain or Oscar Wilde: the wittiest wits to ever crack a bon mot. With the world more and more deﬁned by coarseness and vulgarity, when Trump runs openly as an asshole, is there any room for wit or cleverness? Is there still a place for being intellectual or clever? Is it not better to also be vulgar, and strike back on those terms?

I would hope that that’s not the answer, that everything has to be vulgar. The way Trump talks about Obama: presidents don’t do that! What we’re seeing now is a whole new level of vulgarity. I’m really hoping that it’s not the rule from here on out. It’s really distressing for me to witness this. I really hope we don’t have to throw all decency out the window, just because Trump’s president.

Q: So the way to ﬁght coarsening isn’t with more coarsening?

A: Well, if you say that, then you’re labelled an “elite.” I was listening to something today and it was talking about “coastal elites,” as if everyone who lives in a state that borders the ocean is an elite. It’s such a ridiculous thing to say. I was signing books at a warehouse in Indiana a few years ago, and the woman who worked there was talking about George Bush and how much she appreciated him. I made some comment, and she said, “Listen, mister, you’re in the heartland now! And we have values!” and blah blah blah. Just that whole term—heartland—it’s as if she thought there was actually a heart there! That the United States had a heart and it was in Indiana. It’s reverse elitism really, when people talk about the “real America” and “real Americans.”

Q: As far as where you live now, I remember reading an article from a few years back about how in West Sussex, in England, you’ve become sort of a local character for picking up trash in the countryside. It’s something that crops up in your diaries: your desire to keep places clean, to keep your apartments sparse, even empty. Is there something therapeutic about picking up litter? Or is it nothing more than wanting to keep your patch of the Earth tidy?

A: When we ﬁrst moved to West Sussex, we wrote a letter to the council about the rubbish on the side of the road. We were invited to a meeting of the “Clean and Tidy Advisory Board.” Everything I proposed at the meeting, they gave me a reason why it couldn’t be done. So I thought I’d just do it myself. I guess I’m just a control freak and I’m trying to impose order on everything around me. It started with my bedroom, and now it has spilled out into the world. It’s a compulsion. I can’t not do it.

Q: It gets back to your diaries, and releasing them and editing them while you’re still alive. Is this born of the same compulsion to ﬁnd themes or narratives in your life, or to impose those themes and narratives?

A: Hmm. Probably! That’s a good assessment, yeah. The writing is the same. I never read anything about myself. But a couple of people have written books about me, or included me in books. One guy sent me a copy of a book a few years ago called Compelled to Write. And he talked about me in the book. I didn’t read it, but I thought, that’s what it is. It’s a compulsion. I don’t know that it’s discipline. There’s no force. Force is not an issue. I have to do it. I feel that way about writing. And I feel that way about picking up garbage.