Mitchell Gauvin's debut novel tells a literary joke. And it's a pretty funny one. 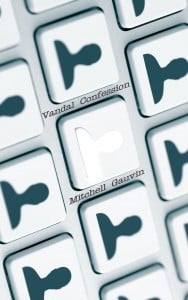 Driving an old Jaguar through a nighttime forest on the Canadian Shield, Xavier and Felix, two fist-bumping buddies who are more than a little familiar with Fight Club, swap verbal jabs about marriage, jobs and the various shortcomings of their lives. When the car stalls, they’re forced to wait long hours until the tow truck arrives.

A writer wannabe, Xavier convinces his pal to read the manuscript he’s carrying. It’s <Title Pending>, a supposedly artsy and au courant memoir. Xavier professes his faith that it will sell: “Gritty, dark accounts of bad parenting, worse fortune, sexual escapades, and symbolic drug use are totally in right now.” When Felix grabs the bundle of papers, out slips a rejection letter featuring damning words such as “overbearing,” “faux gritty,” and “boring.”

Beginning, obviously enough, with a pivotal chapter (“Birth”), the verbally dextrous, if overwrought and improbably dialogue-heavy, memoir takes up the next 120 pages. And it’s so bad, it’s good.

Xavier’s abrasive, smug, school-of-hard-knocks, tough-guy posture (he calls Anne of Green Gables “white trash”; his divorced parents fare worse) offers a Bukowski- and Palahniuk-inspired half-truthful tour through childhood (in “a little deformed house that stood unevenly alongside its deformed identical siblings and other infested apartment buildings on the border between Scarborough and Toronto”), love, school and employment (at a medieval-themed restaurant).

Whether he’s talking about his current residence (“subpar beyond imagination”), a high school coach (“a fat tub of lard lumbering over like an oversized stick of butter on stilts”), or his ex (“we got to devote our Monday-morning hours to enjoying the little things in life, like ignoring each other”), Xavier’s bullying performance always hints at the nobody he believes resides just beneath the bravado.

As satiric parody, a barrage of sharpened one-liners, or an oddly poignant view of masculine display, Vandal Confession amuses and entertains, even as its tenor gradually darkens.