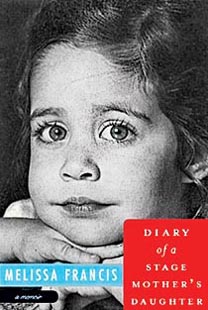 Imagine if Wendy Mesley had played a supporting role on the television show Anne of Green Gables, under the tyrannical rule of a stage mother, and that she had kept her abusive childhood a secret until now, revealing it in a memoir. That’s how explosive this book is to American television audiences.

At eight years of age, Francis was already a seasoned actress in TV ads when she landed the role of a lifetime on Little House on the Prairie. She played the orphan Cassandra, sister to Jason Bateman’s character, both adopted by Ma and Pa Ingalls. (Michael Landon, Francis writes, had “the magnetism of God and Santa Claus rolled into one.”)

Francis paints a damning portrait of her mother’s narcissism. Prone to violent mood swings and irrationality, she began a downward spiral of bad behaviour and fiscal mismanagement—not  to mention the complete neglect of Francis’s older sister, Tiffany. The examples of emotional and physical abuse are shocking. Francis’s dad gets off easy, although his passivity is inexplicable. Francis gets through Harvard and forges a successful career and marriage. Tiffany isn’t so lucky.

Anyone reading this book for Hollywood gossip will be disappointed. There’s only one tidbit: Francis acted in a short-lived NBC television series called Morning Star Evening Star with a young Joaquin “Leaf” Phoenix, memorable for being a home-schooled vegan who’d never had a birthday party. There’s no dirt on Melissa Gilbert or Landon’s alleged womanizing. No matter. The antics of Francis’s mother are more than enough. While Francis’s fortune is squandered and her sister faces death, this Mommy Dearest provides a jaw-dropping conclusion that will make this book a bestseller.