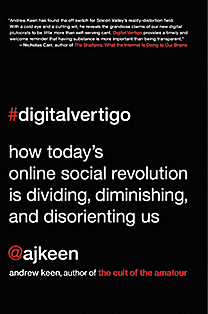 After warning against the dangerous effects of Web 2.0 in his 2007 book The Cult of the Amateur, Keen is back with a jeremiad against “Web 3.0,” the new media world where “everything is going social.” With Facebook encouraging us to be connected with each other all the time, and new companies itching to turn the Internet from a data-based world to “a global digital brain publicly broadcasting our relationships,” Keen fears we’re in danger of losing our privacy: Mark Zuckerberg may “incarcerate us all in an absurd global prison where we are all forced to live in public.”

Since Keen spent his last book arguing that the Internet is destroying professional standards, it’s not a surprise that he doesn’t think much of social media’s ability to improve the public sphere. He says forums and message boards reward those who “wreck the reputations of innocent people,” pointing to the online bloodlust during the Casey Anthony trial. And far from being a tool to overthrow repressive regimes, the way we thought it would be during the Arab Spring, social media is great for dictators, who rely “on social networks to monitor the behaviour, activities and thoughts of their own citizens.”

Keen may be deliberately exaggerating the extent of the danger to privacy (invoking Hitler and Stalin). And he sometimes turns things into threats to privacy whether they really are or not: he laments that teenagers rarely use email, though many of them have simply shifted to private text messages. Still, Keen at least alerts readers to the dangers of revealing too much online—and by pointing out that “the most effective solutions to protecting privacy may lie in the market,” he may be laying the groundwork for more people to make money in the new business of privacy protection. Or, as we’ll call it, Web 4.0.