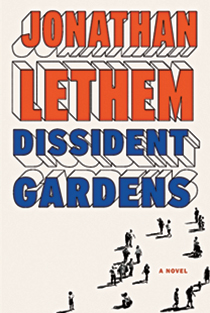 The family at the heart of Lethem’s sprawling, odd and ultimately wonderful novel can only be described as Lethem-esque. Their names alone betray them. Lenny Angrush, Cicero Lookins, Sergius Zimmer: these are monikers—and men—who could only have sprung from Lethem’s uncommonly talented brain.

Set mostly in Queens, N.Y.—a minor departure from Lethem’s usual Brooklyn haunts—Dissident Gardens follows three generations of Jewish-American Communists and radicals from the Second World War up through the present day. In scope, if not size, it is Lethem’s most ambitious novel. It contains more strands, more themes and more fully realized characters than even the best of his previous work, which includes the great pseudo-detective novel Motherless Brooklyn and Fortress of Solitude, a coming-of-age-cum-comic-book masterpiece released in 2003.

The action in Dissident Gardens circles around two women: Rose Zimmer, a Party organizer who married the wrong Communist and is now sleeping with the wrong cop, and her daughter Miriam, a practical rebel who later becomes a peace protester and activist. Surrounding the two are a funhouse of Lethem creations. Chief among those are Angrush, a coin-collecting Marxist obsessed with bringing a proletariat baseball team to New York, and Lookins, the black, gay, intellectual son of Zimmer’s married lover.

Like the Coen brothers, Lethem has a gift for creating strange, self-contained worlds. In his best novels, as in Coen films, the poignant coexists comfortably with the bizarre. This is a very good Lethem novel. And even at its strangest—one chapter involves a hallucinatory affair with Archie Bunker—it is never less than heartfelt and endlessly, enjoyably, inventive.