How Apple and Google Went to War and Started a Revolution 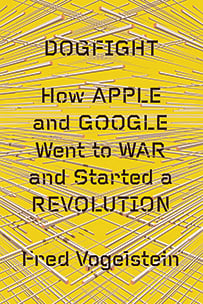 Dogfight: How Apple And Google Went To War And Started A Revolution

The story of how Apple reinvented the wireless business has been told many times, by many people. But few accounts are as riveting as Vogelstein’s, a contributing editor for Wired. Among the revelations: The first iPhone Steve Jobs showed off back in 2007, at the annual Macworld convention, was a barely working prototype. In fact, the device was so buggy and glitch-prone that Apple’s engineers didn’t believe Jobs could make it through his onstage demonstration without suffering an embarrassing crash. The demo iPhone that Jobs carried in his jeans pocket was nearly incapable of holding a wireless signal—so much so that engineers preprogrammed the indicator to always show five bars (full strength) and set up a portable cell tower backstage. There was good reason for not allowing the assembled tech scribes to actually touch one of the “revolutionary” new devices.

Jobs, of course, made it through the unveiling with characteristic aplomb. And the iPhone went on to become the yardstick by which every other mobile device is measured. But its success also made enemies of former friends. Relying on interviews with key players and former employees, Vogelstein painstakingly recounts how Apple and Google went from being close partners in the iPhone’s launch (the first iPhone prominently featured Google’s search engine and its Maps application) to bitter rivals. It turns out that Google, whose former CEO was then sitting on Apple’s board, had been secretly working on its Android mobile software, even as the iPhone was in development. That, apparently, came as a surprise to the Google employees who were working on iPhone-destined software apps, and to Jobs himself. In a biography released after his death, Jobs described Google’s actions as “grand theft” and vowed to “go thermonuclear” on the search giant, kicking off a flurry of patent-infringement lawsuits against Android handset makers.

Apple’s response was the iPad. If Google planned to put its software on every non-Apple phone, Apple would simply create more devices free from Google’s reach. The iPad also opened up new doors. For the first time, consumers had a mobile device that made it easy to read books and magazines and watch movies and television shows. Increasingly, Vogelstein argues, Apple and Google are no longer fighting over smartphones and tablets. It’s a battle for the future of all media.