Double agents are cool. So cool. 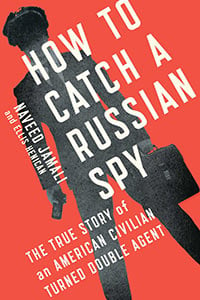 HOW TO CATCH A RUSSIAN SPY

The spy novel has to be every intelligence agency’s most powerful recruiting tool. Everybody who devours one imagines, if only fleetingly, a parallel life as a cunning, smooth-talking agent. Jamali, a car jock and computer geek born to immigrant parents from Pakistan and France—and a proud New Yorker— delivers a memoir that reads like a spy novel, where every fantastical detail is grounded in what he saw with his own eyes.

Jamali split his childhood between gritty Manhattan and suburban Hastings-on-Hudson in Westchester County, outside the city. 9/11 inspired a patriotic streak, and the then-25-year-old embarked on his own mission to help save America from a scary world. On a quest to work in naval intelligence, he fell half-backwards into a three-year stint as a double agent under the watchful eyes of the FBI.

His target: Oleg, a Russian diplomat-cum-spy who works at the UN and quietly searches America for sensitive U.S. government data. The pair meet in the storefront of Jamali’s parents’ business, a clearing house of hard-to-ﬁnd books (clinically named Books & Research). The perfectly dull setting, only a few blocks from the UN’s headquarters, frames the intrigue to follow. When Jamali tantalizes Oleg with documents he can access, the conversation goes down in the kinds of bland suburban eateries that infest every off-ramp in America; Hooters is where they negotiate payouts.

Jamali’s self-administered training for undercover work rests on slick American movies. While Hollywood’s romantic portrayals of war are interrupted by the odd film that reminds us of the brutality of real war zones, none refutes the coolness of the spy. Jamali’s own life, too, was built for the big screen. He knows it as he pens his own story, aided by co-writer Ellis Henican, a Newsday columnist who’s also helped bring the lives of a Navy SEAL and NASCAR legend to life. Good thing Fox acquired the movie rights. Don’t be surprised if the real-life Jamali ends up playing himself.