An ode to Eaton’s by a U.S. writer traces the clan’s eerie similarities to the Crawleys 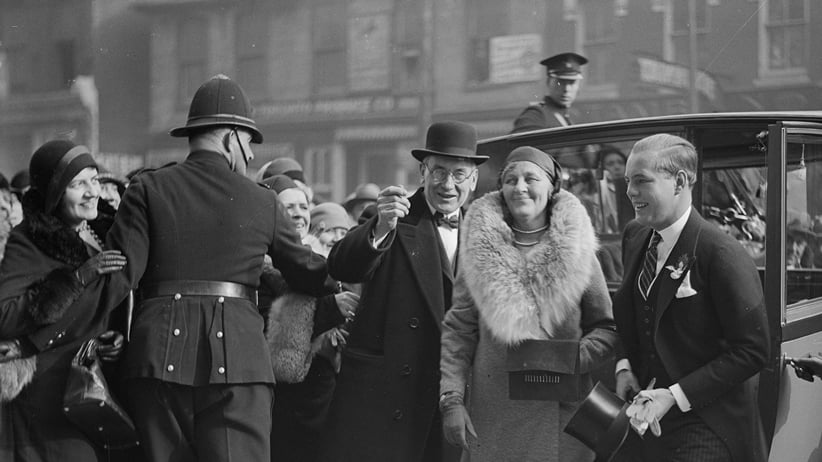 Quick, think of a wealthy family with a formidable matriarch, a stupendous estate, a fleet of servants and a desperate need to modernize. If you said the Crawleys, you’d be right, of course—but you could also be describing the Eatons.

“I just saw George [Eaton] at the York Club having lunch, looking very Downton Abbey,” chortled Joe Martin, director of Canadian business history at the Rotman School of Management at the University of Toronto. “George is a good sport. He won’t mind the comparison.” Martin pointed out that founder Timothy Eaton’s son, Sir John Craig Eaton—“a very classy guy”—and his wife, Lady Eaton, are quite a good fit for Lord and Lady Grantham.

The Eaton-Crawley comparison is so compelling that Bruce Kopytek used it to pitch his new book, Eaton’s: The Trans-Canada Store, to his U.S. publishers. “There’s no denying the parallels. I called the Eatons ‘Downton-esque’ when selling the idea,” recalled Kopytek, a Michigan-based architect whose family crossed the border to shop at Eaton’s throughout his childhood. This is Kopytek’s third book about iconic and mostly defunct department stores, and he runs a blog called the Department Store Museum. His Eaton’s book isn’t an exposé about the family’s personal lives. “It’s what everyday people told me about their personal experience working and shopping at Eaton’s. I got hundreds of letters and emails.”

Although Kopytek is American, the book contains charmingly sentimental lines like this: “A Canada without Eaton’s will never seem completely whole to those who knew this superlative institution and how it played a pivotal role in the lives of Canadians.” His book also affirms the Eaton-Crawley comparison. After Lady Eaton was presented at court to King George V and Queen Mary at Buckingham Palace, she lamented, “It’s a pity that courts have been abandoned, and the much less formal outdoor ceremony of garden-party presentations substituted”—which sounds exactly like something Maggie Smith’s character would say on Downton Abbey.

If Lady Eaton was our country’s leading matriarch, that’s most evident in the mansion she built in King City, north of Toronto, in 1939. The family sold Eaton Hall to Seneca College in 1971 for $1.5 million—“the deal of the century, for the land and the buildings,” said Kelly Mathews, a history buff who works at Seneca College and is writing a book about the 72,000-sq.-foot Norman château, which is undergoing extensive renovations for its 75th anniversary this year.

“In its day, Eaton Hall had a full dairy, a farm, horses, a barn, a greenhouse, a gatehouse, a hospital, drivers and nannies, so it was more than a mansion,” notes Matthews. Just as the Granthams turned Downton into a hospital in the Great War, Lady Eaton handed over the keys of Eaton Hall to the Royal Canadian Navy and donated medical supplies during the Second World War; Eaton Hall hosted the region’s most genteel hunters, as did Downton; and there was plenty of kitchen drama when Maude, the Irish cook, was faced with an interloper: the head cook from the Eatons’ upscale restaurant (now known as the Carlu) was asked to teach Maude how to make some English specialties. (Mrs. Patmore, anyone?) On the sadder side, the Eatons and Crawleys both lost a beautiful heiress to an early death. And both families faced a crisis.

“The restructuring of Eaton’s was a case of too little, too late,” noted Peter Jaskiewicz, an associate professor at the John Molson School of Business at Concordia. “In Downton Abbey, Matthew Crawley came in and took them off autopilot to turn things around in time.”

Rod McQueen, author of The Eatons: The Rise and Fall of Canada’s Royal Family, argues the Downton comparison is “a bit of a reach because Sir John Craig was merely knighted and the aristocratic Crawleys would’ve looked down their noses at the Eatons for being in the trade”—but he admits “Lady Eaton certainly took on the airs of the Crawleys.”

Kopytek won’t listen to anything unkind about the Eatons. “Their motivations were more wide-ranging than financial,” he said. “They stand as a symbol of the collective piety of Toronto, pre-1950s. Maybe it took the Crawleys to bring us back to the Eatons.”