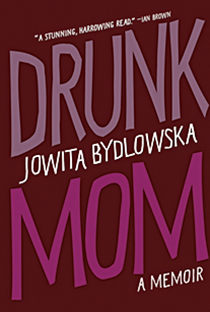 Admitting that you’re a new mother who spent the first year of your son’s life getting so plastered you routinely blacked out, tended to him while fairly out of it, and wheeled him through a snowstorm while lost is both brave and reckless in a culture that chastizes pregnant women for even glancing at a glass of wine. True, maternal tippling is a trendy topic on “mom” blogs like Mommy Needs A Cocktail and Vodka Mom. But these chirpy, jokey accounts don’t touch the dark spiral of addiction Toronto writer Jowita Bydlowska relives in this riveting account of her relapse into alcoholism after her son’s birth.

Bydlowska is an evocative, talented and gutsy writer who appears willing to confess all—googling how long it takes cocaine to pass through breast milk, putting her fist in her mouth to mask the sound of vomit, waking in a hotel room alone, not remembering how she got undressed. The former fashionable party girl details the grip of her addiction—“the wanting that was bigger than me”—while tempering out-of-control behaviour with paeans to motherhood: the cosmic joy of her son’s first smile, her agony of knowing, in her lucid moments, that she’s failing him.

Addictions, and the damage they cause, are messy, resistant to pat narratives. So it is here. Details of Bydlowska’s relationship with her partner are blurry, and a chapter blaming family “dysfunction” feels tacked on. She writes from newly won sobriety, rehabs and relapses behind her, one hopes, though drinking is clearly part of her self-definition. “Alcoholism isn’t something you can slow down or ever unlearn,” she writes.

Bydlowska is also careful to sidestep some of the inevitable censure she’ll receive: she drank only twice during pregnancy, she writes. Still, this memoir is destined to garner debate. Bydlowska writes of watching other upscale stroller-pushing moms and wondering: do they hide mickeys in their diaper bags too? With this bracing book, others will now be asking that question as well.