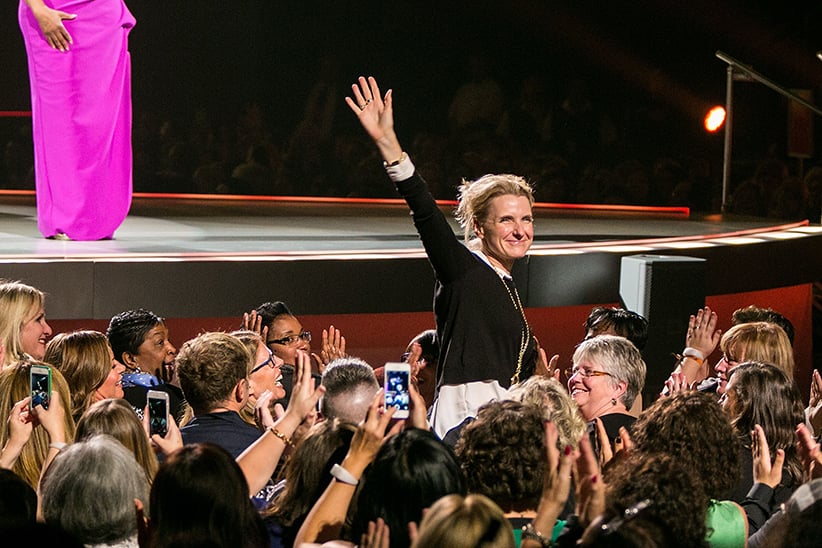 Elizabeth Gilbert waves at the crowd at Oprah’s The Life You Want Weekend on November 7, 2014 in Seattle, Washington. (Suzi Pratt/FilmMagic/Getty Images)

Elizabeth Gilbert catapulted into literary stardom in 2006 with her post-marriage travel memoir Eat Pray Love: One Woman’s Search for Everything Across Italy, India and Indonesia. The trifecta of pasta-scarfing, om-chanting and love-finding was championed by Oprah, made into a Julia Roberts movie and sold more than 12 million copies. Gilbert’s confessional, inspirational can-do messaging (“I crossed the street to walk in the sunshine”) resonated with a huge female audience. Her prose style was candid-but-wise best friend, her message the literary equivalent of female Viagra. The memoir and Gilbert’s ensuing celebrity were, together, a female fantasy: Woman escapes unsatisfying marriage (“The only thing more unthinkable than leaving was staying; the only thing more impossible than staying was leaving,” she writes), self-actualizes in exotic locales and achieves happily-ever-after. If a silver lining was to be found, Gilbert nimbly ferreted it out: “This is a good sign, having a broken heart,” she wrote. “It means we have tried for something.”

Such was Eat Pray Love’s impact that it inspired a small army of women to hike the Camino de Santiago or embark on similar self-discovery treks—and try to make a million bucks writing about it. The book also summoned ardent detractors who denounced it as solipsistic “priv-lit,” a nod to Gilbert’s privileged First World self traipsing across distant lands to find herself  (“I think I deserve something beautiful,” she writes at one point). Not one to have her mellow harshed, Gilbert paid no heed: Her 2010 memoir Committed: A Skeptic Makes Peace with Marriage—an account of marrying her Eat Pray Love lover—was another bestseller.

Her new book, Big Magic: Creative Living Beyond Fear, further cements Gilbert’s place as the ultimate lady whisperer. The how-to, directed at helping people live their most creative and fulfilling lives, is animated by the “You deserve it!” credo that underlined Eat Pray Love. She’s speaking here not to professional artists or writers, but to her base: women around the world who want to journal or knit or write or paint. She’s coach and cheerleader to the masses, sharing secrets and insights so readers can “bring forward the treasures buried within them.” 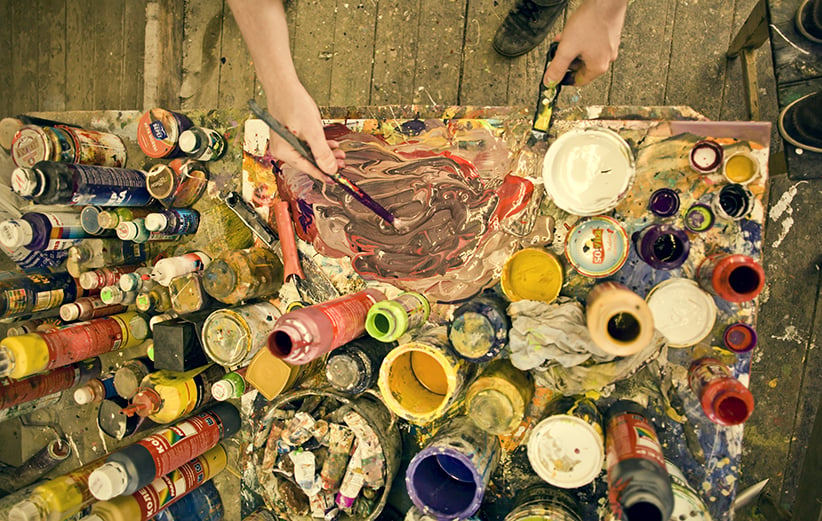 Gilbert has been pondering the subject of creativity since she was a teenager, she tells Maclean’s, explaining that Big Magic was born of a 2009 TED Talk: “It was highly personal, about genies and fairies,” she says. “The audience was full of tech guys and venture capitalists. I thought it would bomb.” Instead, Gilbert’s gift for instant intimacy prevailed: People from around the world contacted her. “It’s like I hung a sign on my chest and said, ‘Please come to me with your questions about creativity.’ ”

As in Eat Pray Love, Big Magic fuses the mystical with the practical; Gilbert’s own story tells the tale. At age 16, around 30 years ago, she made a cosmic contract, she writes: “I simply vowed to the universe that I would write forever, regardless of the result.” She plugged away, working like a “farmer,” writing every day in her 20s through a stream of rejection letters. She’d go on to publish a short-story collection, a novel and a biography of naturalist Eustace Conway that was nominated for a National Book Award. She was also a successful magazine journalist (her GQ story “The Muse of the Coyote Ugly Saloon,” based on her days tending bar, was made into the movie Coyote Ugly) before hitting the Eat Pray Love jackpot.

Every writer has a theory about creativity and how she writes; Gilbert’s skill is in articulating it in a way that speaks to millions. In Big Magic, she captures a yearning, as she does with each of her books—for marital happiness, or a truer life, or work that feels authentic to one’s self—and somehow finds an answer, a kind of map to get there. Authenticity, that modern virtue anyone can achieve, is a big part of what Gilbert is selling. Don’t worry about being original, she advises. It’s better to be “authentic”: “I tell people, ‘Everything’s been done, but it hasn’t been done by you.’ ”

The book’s arrival is perfectly timed to what Gilbert sees as a creativity crisis no one has identified but many people will relate to: “Ten to one, I meet people who wish they were doing and making amazing things, who have ideas but who are blocked by fear,” she says. “They feel they don’t have permission, they’re not entitled, they’re not in the right city, the right age, they don’t have a studio.” Another impediment is perfectionism, which she describes as a “high-end haute couture version of fear . . . people really saying, ‘I’m not good enough and I’ll never be good enough.’ ” Women are particularly prone to it, she writes: “Too many women still seem to believe that they are not allowed to put themselves forward at all, until they and their work are perfect and beyond criticism.” Perfectionism assumes something can be perfect, but it’s so subjective, she tells Maclean’s. “Show me any work of art you hold up as perfect and, in two seconds, I will find you someone on the Internet who hates it.”

Fittingly—considering the nature of the book that made her a blockbuster author—Gilbert frames the creative process as a relationship: “I’ve had a visitation by something that wants me to work on a project, and I’m going to engage in a relationship with this idea and, together, we are going to make something out of nothing,” she says. Ideas are like molecules floating about, waiting for someone to seize upon them, she writes— they’re “disembodied energetic life forms” with “consciousness” and “will.” In the book, she shares the story of working on a novel set in Brazil about an American middle-aged woman, but being distracted by other things. She believes she transmitted the idea to novelist Ann Patchett, whom she met at a book event, via a friendly kiss; later, she learned Patchett was working on a eerily similar plotline that became her 2011 novel State of Wonder. They had never discussed Gilbert’s half-finished novel. “My idea had grown tired of waiting, and had left me,” Gilbert writes.

Big Magic is filled with such anecdotes featuring everyone from Roman Emperor Marcus Aurelius to musician Tom Waits, whom Gilbert interviewed for GQ: “As a songwriter, the only thing I really do is make jewellery for the inside of other people’s minds,” he told her. Making art is not a matter of life and death, writes Gilbert: “There’s never been a national arts emergency.” It’s a clever, if disingenuous, sentiment in a book celebrating creativity and its vital role in living a fulfilled life. But Gilbert is a master of making a contradictory paradox appear profound: “Creativity is sacred and it’s not sacred,” she writes. She’s been asked, “Do you believe in magic or hard work?,” Gilbert tells Maclean’s: “My answer was ‘yes.’ ”

Gilbert doesn’t promise readers they’ll form the next Arcade Fire, or even become the next Elizabeth Gilbert. Small, creative expressions are equally valid, she writes, referring to a friend who returned to figure skating in adulthood and a man she met in India who took great pleasure from decorating his ox. This is the crux of Gilbert’s appeal; whatever subject she’s tackling, it’s ultimately about finding happiness—and convincing readers that’s within their grasp.

Above all, Gilbert is strategic. She rejects the notion that artists never compromise their vision, telling the story of selling a short story to Esquire in 1993, her first big break. The magazine asked for massive cuts to run it; after much anguish, she took a shredder to it. The story was better as a result, she writes. She tells readers to keep their day jobs—Gilbert herself did, until she didn’t have to—and not to invest in schooling to pursue an artistic career unless they can afford it. “I beg [people] not to take out $150,000 in loans to get a degree in creative writing,” she tells Maclean’s. “I feel that’s one of the most insidious rackets going on in the creative world right now.” Starving in a garret isn’t for her: “With rare exceptions, creative fields make for crap careers,” she writes. Gilbert, of course, is that rare exception.

Anyone buying Big Magic in the hope it will provide a roadmap to duplicate her success will be disappointed; there’s nothing about the creative process behind Eat Pray Love. That was a by-product of her desire to return to Bali, she tells Maclean’s. She wrote a book outline to finance the trip; her publisher, sensing a winner, fronted a $200,000 advance, money she’d not have received without a publishing track record, she says.

The story is telling. In June, Gilbert published a piece in the New York Times, “Confessions of a seduction addict.” She was writing about romantic seduction, but the word applies equally to her approach to the wider world. In Big Magic, she holds up the promise of an achievable, expressive creative life free from torment and unhappiness. “Be the trickster, not the martyr,” Gilbert instructs. She cleverly upends stereotypes that can weigh artists down. Don’t make the mistake of seeing your work as your “baby,” she advises. See the process of making it as something that created you.

As for who created Elizabeth Gilbert, the answer is Elizabeth Gilbert. She cites Hermione Granger, the studious witch heroine of the Harry Potter series, as her inspiration: “That’s who I model my life on,” she says of the beloved fictional character. It’s a perfect, and perfectly telling, answer.

To hear Anne Kingston’s conversation with Elizabeth Gilbert, listen to this week’s edition of our books podcast, The Bibliopod. Subscribe free on iTunes, Stitcher and Beyondpod.