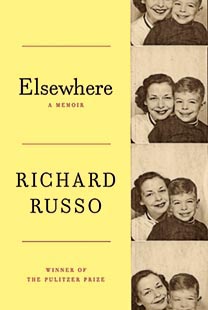 Pulitzer Prize-winning author Richard Russo gives his single mother, Jean, full credit for turning him into a reader. After a long day at the office, Jean sat on the couch with a good book and encouraged him to do the same. A writer was born. Russo’s gratitude for this is the only uncomplicated emotion he has for his mother in Elsewhere, a memoir about their bond—a bond that threatened to capsize his marriage and derail his career. Fans of Russo’s will enjoy plotting which novel he must have been writing during each family crisis, and they’ll relish seeing glimpses of Russo’s real mom in his fiction. Thankfully for readers of Elsewhere, if not the author, Jean is more like Ned Hall’s wacky mother in The Risk Pool than Anne Grouse in Mohawk.

On the surface, pretty Jean Russo looked like a role model for the postwar emancipated woman. She ditched her husband, a charming gambler, and took a responsible job at GE in Schenectady, near their hometown of Gloversville, N.Y. She guarded her own independence while reserving contempt for housewives. “Indeed, [they] had no opinions worth listening to,” recalls Russo. But Jean’s independence was precarious. She needed bailouts from her parents, who worried their daughter’s case of “nerves” would lead to a breakdown. When Russo left Gloversville to go to college in Arizona, Jean went with him, and spent the rest of her life either pining for or raging against their hometown. Until Jean’s death 35 years later, Russo and his wife had the thankless task of trying to make her happy.

The author’s cousin and boyhood friend Greg, to whom the book is dedicated, also looms large in the memoir. Greg decided to stay in Gloversville and raise a family. This decision seems to flummox Russo, who writes about his hometown with survivor’s guilt, shining a new light on his fiction. After reading Elsewhere, fans will forever be in on the secret, spotting the ghosts of Jean and Gloversville on every page.