A review of 'Frog Music' 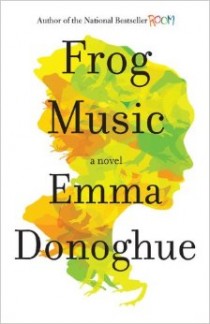 A burlesque dancer undresses for bed while singing a French lullaby to her faraway baby, unaware that the thunderclaps she thinks she hears are actually gunshots that have killed her travelling companion, a cross-dressing, law-breaking, female frog catcher known to all as Jenny Bonnet. So begins the historical tour de force Frog Music, a lyrical, ribald, meticulously researched ﬁctionalization of Bonnet’s unsolved murder in the summer of 1876 outside of San Francisco, a city roiling under the double-whammy of a sweltering heat wave and a smallpox epidemic. Solving Jenny’s murder falls to the exotic dancer Blanche Beunon, who performs at the House of Mirrors when not leaving male customers winded on hotel sheets. Over the next three days, Blanche deduces that her own life is also in peril, along with that of her baby, who may or may not be in the possession of her feckless lover, Arthur and his ami intime, Ernest.

Donoghue unravels the narrative masterfully, reeling forward and back to fill out Blanche’s story: how the former circus performer emigrated from Paris with Arthur, a former tightrope walker, and Ernest, seduced by the prospect of a free-love Bohemian existence; how she unknowingly put her baby with Arthur in one of the “horrific” baby farms of the day; how she befriends the enigmatic Jenny after the trouser-wearing outlaw crashes into her while riding a stolen bicycle; how she came to rescue her damaged son and forge a reluctant, affecting bond with him. Blanche is a multifarious character—foolish and brave, canny and vulnerable—ever ready to prevail over a rising tide of woe. The fact that the other characters are not as fully realized doesn’t detract too much from a tale that bristles with the smells, grit, rhythms and carnality of the city’s demimonde. It’s a rollicking read, punctuated by snippets of French, song lyrics and high-voltage sex scenes. The afterword outlines Donoghue’s exhaustive research, with her admission that the unexpected resolution to the crime was only an “educated hunch.” It’s a tribute to her storytelling skills that Frog Music never reads like a history lesson, but unspools cinematically, a fluid glimpse of throbbing life, time and place.