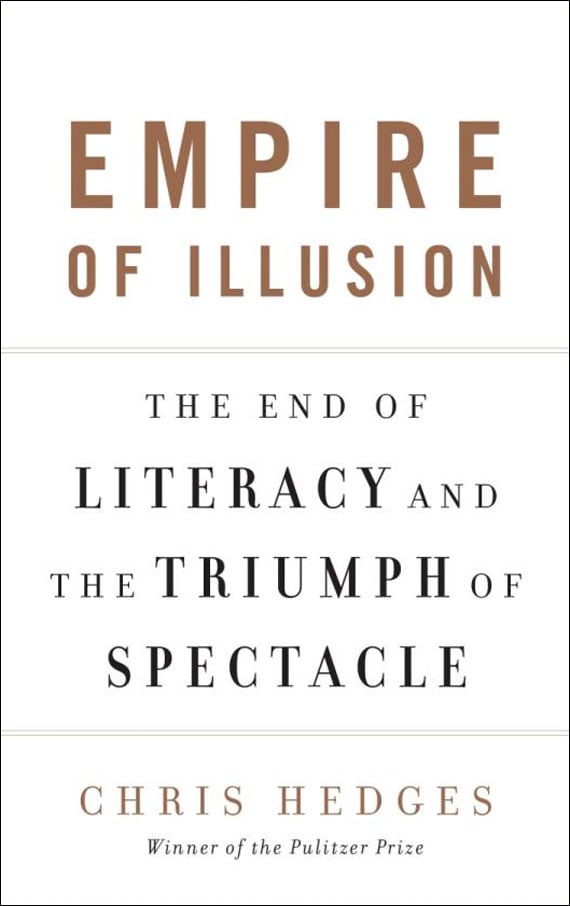 Like Christopher Hitchens, in so many ways his opposite number, Chris Hedges occupies an isolated and occasionally lonely spot on the ideological spectrum, angering progressives as much as conservatives. He may be a socialist and the author of American Fascists (2007), the title of which pretty much sums up what he thinks of the Christian right in his country. But he’s also a religion-friendly guy—the son of a Presbyterian minister, and the possessor of both a master’s degree in theology and a firm belief that spiritual seeking is hard-wired in humans—a stance that provokes many on the militant atheist left. In fact, Hedges is as much a throwback as a revolutionary: an old-fashioned, passionate, moralist America-Firster. And none of that is meant as criticism.

Hedges is not likely to win a lot of new friends with his latest work, Empire of Illusion (Knopf). The “illusion” part of the title is made clear in Hedges’ savage assault on celebrity/pop culture that focuses on two soft, but richly deserving targets, pro wrestling and the porn industry. Wrestling he uses to symbolize the vacuity of celebrity culture, how Americans (and, increasingly, the rest of the world) are “bombarded with cant and spectacle” that robs them of “the intellectual and linguistic tools to separate illusion from truth.” Celebrity culture is one of images and sound bites, he writes, one that both drives and is enabled by, functional illiteracy. (He cites studies estimating the illiterate and semi-literate proportion of the U.S. and Canadian populations to be about 42 per cent.) If the Lincoln and Douglas debates of 1858 were carried on at a high-school graduate level, George W. Bush was down to Grade 6 vocabulary in 2000, and Al Gore, his supposedly pointy-headed intellectual opponent, debated at a seventh-grade level. And, like porn—which Hedges convincingly shows to be a far more vicious, victim-rich industry than liberal thought likes to imagine—celebrity culture provides new gods to distract us. (Remember Hedges’ conviction about our intrinsic natures.)

But distract us from what? Ranting against pop culture is generally the territory of the political right, but Hedges does not deliver his polemic in order to call Americans back to a faux Rockwell-esque world of unquestioning faith and jingoism, as many Christian conservative commentators do. For him, high-flying televangelists are part of celebrity culture, not an antidote to it. No, the “illusion” serves the other half of his title, the “empire,” the corporate and military forces that he believes profit from the impoverishment, moral and financial, of his countrymen. It prevents Americans from seeing what is done in their name or even what is done to them. What seems to truly drive Hedges’ rage is his conviction that no republic has ever survived the acquisition of empire, and that his own will be no exception. The U.S. is in a death spiral, he believes, inextricably trapped in other nation’s lives and in “a culture of illusion that is, at its core, a culture of death—it will die and leave little of value behind.” Remarkable, bracing and highly moral, Empire of Illusion is Hedges’ lament for his nation.