Empire of Pain: The billionaire Sackler family's role in the opioid crisis 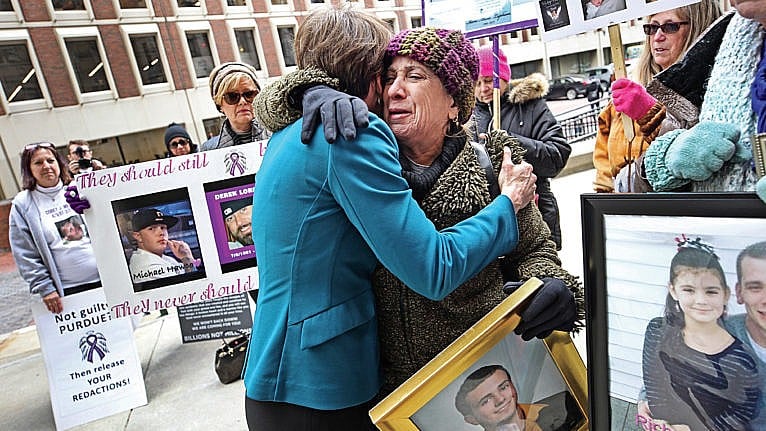 It was a long-standing interest in the business practices of drug cartels that first turned Patrick Radden Keefe’s attention to the questionable (to put it mildly) policies of one pharmaceutical company. In an interview about his new book, Empire of Pain: The Secret History of the Sackler Dynasty, the New Yorker staff writer recalls how his investigations into Mexican drug cartels showed him enterprises “very sensitive to consumer demand in the United States. So, in 2010, when the cartels suddenly started sending much more Mexican heroin north, the riddle was why?” The root cause of the heroin surge, which the U.S. Centers for Disease Control and Prevention (CDC) calls the second of three waves in an ongoing epidemic of opioid overdose deaths, lay in the first wave, Keefe learned. And that wave could be summed up by one familiar name: Sackler.

Like their 19th-century forebears, the Sackler family strove to keep their business life discreet and their philanthropy prominent. Their name went on display at Harvard, Yale and Stanford, at the Metropolitan and Guggenheim art museums in New York, and at London’s Serpentine Gallery and Kew Gardens, to list a few. “I’ve lived in New York on and off for decades,” says Keefe. “Yeah, I knew the name.” But not the business, he continues, not the family firm, Purdue Pharma, which took its blockbuster drug, OxyContin, to market in 1996, bringing the Sacklers—mere multi-millionaires a quarter century ago—$13 billion.

The pain relief drug also kickstarted the CDC’s first wave, bringing the U.S. a significant if ultimately unquantifiable number of its 500,000 opioid deaths. In Canada, which authorized OxyContin in 1996 too, opioids have taken a commensurate toll. In just the last five years, as the third wave—centred around illicitly manufactured fentanyl, a drug more potent than either OxyContin or heroin—began cresting, 20,000 have died.

READ: Decriminalization is not a radical solution to the opioid crisis. And it would work.

It’s arguable that no one, not even the Sacklers—as secretive among themselves as they are with outsiders—knows their story as well as Keefe does now. Deeply researched and beautifully written, Keefe’s family saga of the three psychiatrist-cum-medical-entrepreneur sons of pre-Great War Jewish immigrants to New York devotes almost half its 500 pages to the years before OxyContin. That’s because the dominant figure among Arthur, Mortimer and Raymond, eldest brother Arthur, died in 1987 at age 73. (The others lived into their 90s, dying in 2010 and 2017, respectively.)

In 1952, the brothers bought a pharmaceutical company called Purdue Frederick, a sleepy manufacturer of earwax remover and laxatives. But Arthur concentrated on his medical advertising work, successfully pioneering the marketing style and chumminess with government regulators that would serve OxyContin so well. The brothers grew wealthy through Arthur’s brilliant promotion of the Roche tranquilizers Librium and Valium. The latter was as iconic a 1960s drug as LSD, and the inspiration for the 1966 Rolling Stones hit Mother’s Little Helper. It was also the world’s first $100-million drug. Arthur went on to initiate the family’s highly visible philanthropy, becoming a prominent art collector, and then a donor, to the Met and other major institutions.

Since Arthur died before OxyContin, his heirs don’t share in its vast wealth but they are not poor cousins. Even before his death, Purdue Frederick, later reorganized as Purdue Pharma, had one lucrative product of its own, one that eventually brought in $170 million a year after its 1984 introduction. MS Contin—the “MS” standing for morphine and the “Contin” short for “continuous,” just as it is in OxyContin—was the first time-release opioid and allowed cancer patients to control pain at home rather than in a hospital bed. Mortimer and Raymond Sackler, along with Raymond’s son Richard—who would become Purdue’s driving force—soon began planning ahead, for when the so-called “patent cliff” arrived, and competitors could flood the market with cheaper generic versions.

For a patent-protected replacement, they settled on oxycodone, another synthetic opioid already used, in minute amounts, in Percodan (where it was mixed with aspirin) and Percocet (mixed with acetaminophen). The family had higher ambitions than a new MS Contin, though, and barriers to face. The morphine drug had caught what Keefe calls “a perfect wave,” arriving just as contemporary medicine was rebelling against the traditional fear that possible patient addiction dictated against using opioids for pain. That changing attitude, coupled with MS Contin’s precise targeting of cancer pain, was enough to bring physicians—and their prescription pads—on board. Between 1990 and 1994, legal American morphine consumption increased by 75 per cent.

But Purdue’s new OxyContin was something else again, partly because it was twice as potent as MS Contin, but mostly because the Sacklers wanted to expand its market to the estimated 50 million Americans who suffered chronic “non-malignant” agony, from back pain to arthritis. They expected physician and FDA opioid hesitancy to remain high in that area. But the FDA quickly approved not only the new drug but its descriptive package insert, which included the words “Delayed absorption, as provided by OxyContin tablets, is believed to reduce the abuse liability.” That was a peculiar piece of rhetoric, Keefe notes, denounced in one FDA email as “sounds like B.S. to me.” But the idea, and the doctor-soothing wording, was accepted by an FDA official who mattered most. The executive who oversaw pain management at the agency became a Purdue employee a year later.

The FDA cleared, the Sacklers turned to the next hurdle: putting their sales force through training that included role-playing with skeptical doctors. The salespeople were to quote the FDA-approved insert language about the delivery system, and explain the company line that abuse arose from a patient’s peak-and-trough experience, an effect eliminated by controlled release. Doctors themselves were wooed through invitations to join a Sackler-backed paid speakers bureau, all-expenses-paid trips to “pain management” seminars, and free food. A 2016 study demonstrated that even a $20 meal bought for a physician could change her prescription decisions, something evidently already known to Purdue, which had a $9-million annual budget for food for doctors. It all worked: by 2000, OxyContin had racked up $1 billion in sales.

And an already staggering human cost. Media reports began to take note of “hillbilly heroin” spreading across rural America, especially Appalachia, “like some airborne virus,” in Keefe’s evocative phrase, into places where people lived lives of hard physical labour or had been disabled by it. It soon moved on to the big cities. So-called pill mills sprung up everywhere, with doctors writing prescriptions “with both hands,” as one medical secretary put it. In Los Angeles, a clinic staffed by a debt-mired physician prescribed a million OxyContin pills in two years.

READ: Why people hooked on opioids, especially in the U.S., keep falling through the cracks

Purdue was warned by sales reps about the abuse of OxyContin as early as 1997, according to salespeople’s field notes later accessed by American investigators. An anonymous company insider showed a New York Times writer how the sales territories of Purdue’s “Toppers”—its most successful and rewarded sellers—were all widely known to be opioid abuse “hot spots” in rural America. But such feedback went unheeded until public awareness made that untenable, and then the company switched to a defence eerily akin to that of America’s gun-makers—drugs, like guns, are mere tools, and the damage they wreak is the responsibility of individuals, evildoers or “addictive” personalities. Now that the news was out, Purdue fought back vigorously, driving litigants into retreat with a legal budget that soon reached $3 million a month.

It was 2010, the year when OxyContin’s patent protection was approaching the cliff, before Purdue took decisive action, introducing a new coating that could not be removed without destroying the opioid within. In a bold about-face, the Sacklers told the FDA that for public safety reasons it should both accept the new version and not approve any opioid pill without such a coating, including the generic competitors poised to hit the market. On the day the original patent was to expire, what Keefe calls the “ever obliging” FDA agreed. (Ever obliging? In 2015 the FDA gave Purdue permission to provide OxyContin to children as young as 11.)

Cue the second wave. With so many pain sufferers and outright high-seekers short on usable OxyContin, the demand for heroin skyrocketed. As it did for the remaining source of old-style OxyContin: Canada. Despite its new piety about safety, Purdue kept selling, for another year, the original version in Canada, where sales quadrupled in Windsor for smuggling into Detroit. As for the heroin spike, prescription opioids had destroyed long-standing societal inhibitions about it, says Keefe. Consider “Jeff,” he continues, the anonymous figure who appears in Empire’s afterword. “When Jeff started taking drugs,” Keefe explains, “he just did not think of himself as a person who would buy heroin on the street and shoot it into his veins. But taking pills—FDA-regulated and doctor-prescribed!—okay. Then he’s addicted and without supply. Then he turns to heroin.”

And on it went and, to a lesser degree, still goes. The Sacklers fight a rearguard action that is increasingly hitting them where it hurts their pride, in the world of art and philanthropy, where their name is disappearing from walls. As for legal jeopardy, the tide does seem to be turning, however weakly. In recent months, American states have united their cases against Purdue (as have Canadian provinces), and the Sacklers themselves. It’s difficult to be entirely certain, Keefe says, but “the broad outlines of the endgame are clear.”

“The family will pay some sizable amount of money,” he says. “They will exit the situation with a huge fortune intact, but their reputation in tatters.”

This article appears in print in the May 2021 issue of Maclean’s magazine with the headline, “Empire of Pain.” Subscribe to the monthly print magazine here.