REVIEW: Escape From Camp 14: One Man’s Remarkable Odyssey from North Korea to Freedom in the West 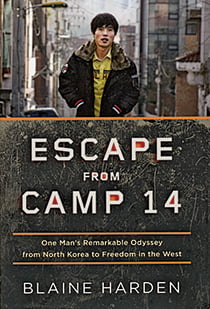 Forget the subtitle: the story of how Shin Dong-Hyuk, after crawling through a lethal electrified fence over the insulating dead body of a companion, made it out of a North Korean prison camp and eventually into the U.S., is a remarkable odyssey all right. But nowhere near as remarkable a story as Shin’s early life. Of the thousands who have fled his nation, including two dozen from its gulag, Shin is the only one who was born in a prison camp—the only one whose life was, from its very beginnings, brutally circumscribed to a degree that shocked even his countrymen.

Shin is a physical witness to the deprivations of growing up in a camp: stunted by malnutrition; scarred and bent by heavy childhood labour, beatings and torture; his right middle finger missing, cut off with a kitchen knife as punishment for dropping a sewing machine. Still worse was the damage to his soul. The incessant, driving need for food dominated Shin’s life. He stole his mother’s rations, and was brutally beaten by her for it; he scooped spilt soup off filthy floors and picked undigested corn out of cow excrement. He did not feel degraded by any of it because he had no idea humans could be degraded. He hadn’t been taken from a decent life and thrust into the valley of the shadow of death—Shin was born there, and, as Harden notes, “he accepted its values.”

The product of a “reward” marriage—guards had matched his parents, who continued to live in separate dormitories—Shin had no experience of any kind of affection. He viewed his mother and older brother as competitors for food, and turned them in when he learned, at age 13, that they planned to escape. Unsurprisingly, his adjustment to life in the West has been difficult. Issues of trust and guilt—Shin now knows how most people view the idea of betraying their mothers—sometimes overwhelm him. He is still learning, as Harden reports in this spare but moving book, to be a human being.