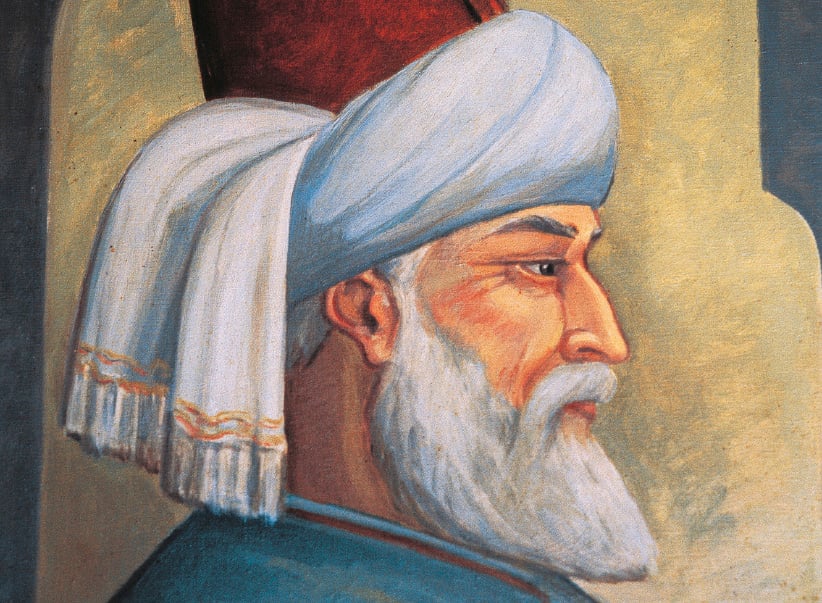 The most widely read poet in the United States isn’t Walt Whitman, Emily Dickinson or Allen Ginsberg. It’s Rumi, the Sunni Muslim born 810 years ago, whose six-volume Masnavi is considered a Persian-language masterpiece. Like his father, Rumi was a traditional preacher; he turned to Sufism, and poetry, only after meeting the rambling mystic Shams of Tabriz, with whom he shared an intense bond.

Due partly to Genghis Khan’s terror campaigns, Rumi and his family were highly peripatetic: the map of Rumi’s life encompasses more than 4,000 km, including present-day Tajikistan, Uzbekistan, Iraq and Syria—where Rumi studied—and Turkey, where he died in 1273. It’s a route that the American poet, novelist and biographer Brad Gooch largely retraced while researching Rumi’s Secret, the first popular biography of the poet. Maclean’s contributor Emily Donaldson spoke with Gooch about his immersion in the life of Rumi.

Q: To what do you attribute the fact that a 13th-century Persian Sufi Muslim is one of the most popular and bestselling poets in the U.S.?

A: I first read Rumi’s poetry at the home of a friend I was visiting in Miami. I found two volumes of translations by A.J. Arberry and was entranced and somewhat mystified by his infectious love poetry, powerfully mixing the human and the divine. In the mid-1990s I received the same Christmas gift from three different people: The Essential Rumi, translated by Coleman Barks. This was the book that turned Rumi into the “bestselling poet in America.” Taking a free-verse approach, Barks found a match for Rumi’s flaming spirit in an almost beat poetry. Yet I’ve found that no matter the translation—from academic literalism to permissive loose rendition—something of Rumi’s voice and vision always comes through. Somehow, in the middle of the 13th century, he articulated the sound of one soul speaking, and we continue to be drawn by his passion and creativity. Yet few knew much about the historical Rumi, and so I set out to try to put a face and some historical and social context to the floating name of “Rumi.”

Q: Do you think the comparison of Rumi to Whitman made by Sebastian, the carpet seller you met in Aleppo, is apt? Does he conjure any other more contemporary literary figures?

A: Rumi is very much in the tradition of mystical poetry, not only Sufi poetry, but the mystical poetry of the West. He often reminds me of John Donne in his veering from human love poetry to divine poetry. Or George Herbert and the other 17th-century English metaphysical poets. He would have agreed with Emily Dickinson’s advice: “Tell the truth but tell it slant. Truth in circuit lies.” At times he reminds me of Frank O’Hara because of his spontaneous method of composition and the effect of his personal friendships on his content and style—in Rumi’s case, his companion and teacher Shams of Tabriz was both focus and inspiration for his poetry, both a window and a door. Whitman is indeed an apt comparison because of his epic intimacy, his knack for going from the nearby—a blade of grass—to the cosmic, while speaking to the reader as if to a close companion. Human warmth and starry spiritual breadth resonate in both Rumi and Whitman.

A: Even in their own time, Rumi and Shams of Tabriz’s relationship defied neat categorization. Shams was a spiritual teacher who introduced Rumi to the whirling-dance meditation and encouraged him in poetry and song rather than the more orthodox path of being a preacher and jurist. Yet Rumi was already in his late thirties when they met and a religious leader in his own right. Both mentioned the difficulty of identifying who was the teacher and who the pupil, or who the lover and who the beloved. Yet there was a context of Sufi thought at the time in which they understood their love for each other as mirroring God’s love for man, and humans as both mirrors of the light of love and candles creating such light. The line between human and divine love was purposely blurred, hence Rumi’s poetry often played on the pun in Shams’ name—“Shams” is Arabic for “sun.” But who was Rumi writing to? Shams of Tabriz? The natural sun? The eternal Sun? Part of the power of Rumi’s poetry is making the spiritual quest romantic.

Q: You spent time doing research in Aleppo, where Rumi was a theological student, before the onset of the current war in Syria. How did contemporary events affect the writing of your book or your way of thinking about your subject?

A: The strife I encountered on my travels helped me to keep in mind Rumi’s own tumultuous historical moment. He lived most of his life as a refugee, or an immigrant, as his family had escaped the incursion of Genghis Khan and the Mongols (the terrorists of his time) into the land of his birth in Central Asia. During his lifetime Baghdad fell, and with it the caliph, who was both pope and king, threatening the very existence of Islam and its high civilization. Yet this period of utmost darkness in the political realm was countered by efflorescence in mystical poetry and thought, Rumi now merely being the best known among many others.

Q: The subjects of your previous books—Flannery O’Connor, Frank O’Hara—are mostly modern or contemporary. What were the challenges of writing about a subject from such a remote time and culture?

A: Rumi’s Secret was a labour of love, with the emphasis on labour-intensive. I needed to learn Persian, which I worked at by attending a summer intensive program at the University of Texas at Austin, and an immersion summer program at the University of Wisconsin at Madison, that involved living in a dorm with other students and speaking the language 24/7. I also had a private tutor who collaborated with me in translating poems and prose from the original Persian for the purposes of my book. Travel was also challenging, as I traced the 2,500-mile [4,000-kilometre] map of Rumi’s life from Central Asia, where he was born, to Konya, Turkey, where he lived as an adult. I was detained at machine-gunpoint in Tajikistan, just miles from the Afghan border; my camera was swiped by an official of the Ministry of Justice in Tehran; I was in Aleppo when the Syrian Civil War erupted. Perhaps most challenging, and stimulating, was activating my historical imagination to recreate the richly layered and teeming Sufi and Islamic medieval world.