Farley Mowat took us far away, but deep within, too

Why Mowat's Tundra collection is more precious than ever 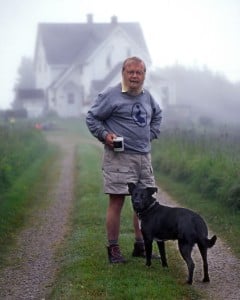 Author Farley Mowat at his summer home on Cape Breton, NS in 2006 (Photography by Peter Bregg)

Farley Mowat is being remembered this week for his beloved books about owls and dogs, whales, wolves and caribou, but I think an even better totem for the author, who has died at 92, would be the muskox—shaggy, improbable and famous for adopting a defensive posture.

And the beast did, in fact, appear on the cover of one of Mowat’s 40-odd books, 1973’s Tundra: Selections from the Great Accounts of Arctic Land Voyages. As a 12-year-old, I got a copy for Christmas. By then, I would already have read, like many thousands of kids, Mowat’s young-adult classics, Lost in the Barrens and The Curse of the Viking Grave, so his name on the cover made a compendium of old explorers’ journals slightly less daunting.

But only slightly. Tundra was tough sledding. Still, there was enough good stuff in there to keep a boy from giving up entirely. Mowat’s introduction declares that Samuel Hearne’s gripping account his stupendous 1769-1772 journeys makes him “the Marco Polo of the Barren Lands.” I admired Hearne’s indomitable style, such as when he noted that after being robbed on the trail by unfriendly natives, “I found my load was now so light that this part of the journey was the easiest and most pleasant of any I had experienced.”

Tundra was the final instalment of Mowat’s “Top of the World” trilogy, which also included volumes for which he mined the accounts of the struggles to find the Northwest Passage and reach the North Pole. But he protested that he was not trying to teach history, exactly, but rather to let readers feel for themselves how these individuals had “grappled with and come to terms with the great polar adversary.”

Mowat’s primary interest in the response of the imagination to whatever nature throws at it is what makes his collections of the best writings of these adventurers fit with his more famous original books. He is being properly eulogized for, among other things, inspiring concern for the environment and drawing attention to the plight of northern First Nations. But it misses something to cast him mainly as a polemicist. He wrote so well about wild places because he knew how plunging into them is always a search for an interior passage, not a public position.

This is a rich vein in our literature. I’m thinking of novels like Steven Heighton’s Afterlands, a wholly original re-thinking of what survival on the ice can mean, or Rudy Wiebe’s Discovery of Strangers, which takes the reader out onto the same barren lands of Hearne and the others whose firsthand accounts Mowat included in Tundra.

One of the special joys of books about the extreme North has always been that we could tell ourselves how it remained there to be experienced much as it was captured on the page, more timeless than just about any other place on the planet. Mowat often presented the region in those terms, like when he writes in the prologue to Tundra about the eternal seasonal cycles of the treeless Arctic landscape and the “ever-present” permafrost beneath it.

Of course, we now know, in the era of climate change, that we are changing those cycles and the frost isn’t so perma as we thought. Sadly, Mowat’s books, at his passing, must be repositioned in our imaginations. The pleasures of Lost in the Barrens or Tundra can never fade, but future readers may not be able to cling to the reassuring notion that these remote places remain essentially unspoiled and immutable.

Far from making his stories outdated, it renders them more precious.