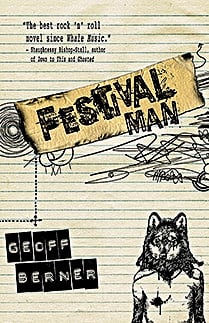 Sometimes it takes a work of fiction to speak truths. Because really, what self-respecting musician would spill the goods on the larceny, loathing and lies that exist beneath the polite construct of multiculti hippie bliss that is the Western Canadian folk festival circuit? Geoff Berner, a fearless klezmer punk accordionist and self-proclaimed “whisky rabbi” who has played more than his share of festivals in Canada and Europe (where he’s opened stadium shows for Norway’s most popular rock band), makes his debut as a novelist by writing about what he knows: grifters and drifters, poets and performance artists, and the delusion and daring necessary to make difficult art happen in a culture such as Canada’s.

The plot of Festival Man is suitably ridiculous, and yet entirely believable to anyone who’s ever made big gambles on low stakes in the Canadian music industry—or anywhere else: a con man and artist manager who survived the siege of Sarajevo makes one last bid for greatness by trying to bag a big-time British management deal for his misfit clients, who are playing the Calgary Folk Festival on the pretext of backing up a hyped Inuit throat singer. There is no gripping climax here. Instead, Berner employs his unreliable narrator as effectively as Paul Quarrington’s Whale Music, or, say, Keith Richards’s Life—each of which, page for page, Berner can match with both anecdotal hilarity and razor-sharp Richler-esque satire.

Festival Man is absolutely required reading for anyone who’s ever played, worked or fallen down drunk at a folk festival. But Berner’s wit transcends a niche audience in the same way you don’t need to know anything about New Orleans to appreciate A Confederacy of Dunces. Readers of Festival Man don’t have to be able to spot microscopically veiled portraits of Corb Lund, Tanya Tagaq Gillis or Billy Bragg—or even know who they are—to laugh out loud repeatedly. Few would believe these stories if told they were true—which, in fact, many of them are.