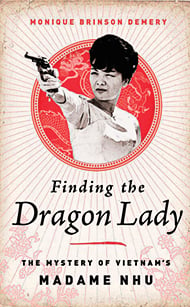 Finding The Dragon Lady: The Mystery Of Vietnam’s Madame Nhu

The original Dragon Lady was a cunning and beautiful Asian villainess in the 1930s comic strip Terry and Pirates. But by the 1950s and 1960s it was Madame Ngo Dinh Nhu, the first lady of South Vietnam, who owned the title, and the fearsome reputation that went along with it.

Born to a privileged family in French Indochina, Madame Nhu became her country’s official hostess when her brother-in-law, the unmarried president of South Vietnam, Ngo Dinh Diem, was installed by the Eisenhower administration as a bulwark against Ho Chi Minh’s North Vietnamese Communists following France’s defeat in 1955.

With her impeccable coiffure, stylish high-necked outfits and penchant for controversial statements—and given the significance of Vietnam in the Cold War clash between Communism and democracy—she often found herself in the international spotlight. When Buddhist monks lit themselves on fire to draw attention to the corruption of Diem’s government, Madame Nhu derisively referred to the protests as “barbecues” and said, “Let them burn and we shall clap our hands.”

“The dangerous, dark-eyed beauty quickly became a symbol of everything that was wrong with American involvement in the Vietnam War,” writes Demery. “She deliberately creates impossible publicity,” U.S. ambassador to Vietnam Henry Cabot Lodge griped of her. “The U.S. can get along with dictators, but not this kind.”

While on a speaking tour of the U.S. in 1963—in typical Madame Nhu fashion, a trip marked by protests and shopping extravaganzas—the U.S. government finally tired of the Diem regime and acquiesced to a military coup that left the president and Nhu’s husband, the vice-president, dead. Stripped of her platform and prestige, she dropped from the public eye.

Demery attempts a reassessment of Madame Nhu, having tracked her down as an old recluse in Paris. (She died in 2011 at age 86.) Despite a wealth of new material, however, much about Madame Nhu and her skill at cultivating outrage around the world remains unexplained. The Dragon Lady is as inscrutable and mysterious as ever.