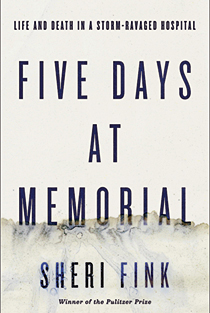 Five Days At Memorial: Life And Death In A Storm Ravaged Hospital

Wildfires, chemical attacks, exploding tank cars and floods: we’re living through times when catastrophic events—ones that are hard to imagine, let alone anticipate—are becoming almost commonplace. But how prepared are our governments, cities and hospitals for these kinds of emergencies? In the case of one New Orleans hospital battered by the aftermath of hurricane Katrina, the existing disaster plans were quickly overwhelmed by power outages, flooding and soaring heat.

When the staff tried to evacuate their patients by carrying them through a hole in the ninth-floor wall and down darkened stairwells in 43-degree heat, to be rescued by helicopters, they discovered they wouldn’t be able to save all of them. When the neonatal incubators wouldn’t fit inside the helicopters, doctors carried the infants in their arms, pumping oxygen into them by hand. But the dedicated doctors and nurses handling this evacuation had to face a terrible choice: which patients should be saved and which held back? And at what point—if ever—was it ethical to end the suffering of the last and sickest ones in line by euthanizing them?

In the court case that followed this tragedy, several workers who had been hailed as heroes were charged with murder. “I injected morphine into those patients who were dying and in agony,” testified Dr. Anna Pou, a compelling main character in this drama. “If the first dose was not enough, I gave a double dose.”

Five Days At Memorial unfolds in two parts—an impeccably researched reconstruction of the events inside the hospital during the disaster, and a gripping account of the investigation and trial that followed. Pulitzer-Prize-winning Sheri Fink, who is also a physician and a former relief worker in combat zones, lays out every shred of evidence, but leaves the final judgment to the reader. (She’s like a vacuum cleaner when it comes to hoovering up detail.) Five Days at Memorial treats the chain of events at the hospital as a microcosm that raises vital and increasingly relevant questions about end-of-life care, and the ethics of euthanasia in extraordinary circumstances.