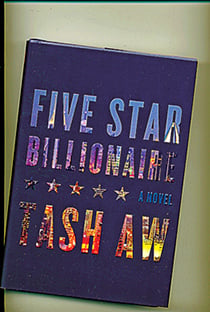 Good literature can tell you what it is to live another’s life. More so than profiles or biographies, it can let you inside, past the barriers and poses, and close to something real. Five Star Billionaire is very good literature. Aw’s third novel, it presents lives—of ethnic Chinese Malaysians living in Shanghai—that in other hands could seem very foreign and makes them at once familiar and revelatory.

The book follows five interlocking stories of migrants, rich and poor, all struggling to adapt to lives they’ve found in China. There’s Justin, the heir to a Malaysian property fortune, alienated by endless schmoozing and graft; Phoebe, a village girl turned factory worker stuck in a cycle of permanent reinvention; Gary, a sexless pop star incapable of intimacy; and Yinghui, a former radical now running a chain of boutiques and spas. Hovering over them all is the titular billionaire, Walter Chao, a man of mysterious roots, who, without giving too much away, is orchestrating the action for his own ends.

Aw, a Cambridge-trained lawyer who was born in Taipei and raised in Malaysia, engages themes here that feel universal, like dislocation. But he also reveals, in contemporary China, a world that remains for many readers unknown. It’s a difficult trick, and in the early going, it doesn’t make for an easy read. Until the different stories begin to intertwine, the book, like its characters, feels hard to know. But for the patient reader, the rewards are ample. Aw’s prose, unadorned and straightforward, drives a narrative that is complex and sometimes surprising. More than anything he makes you care—about his characters and what will happen to them next.