Following the money, with electric prose 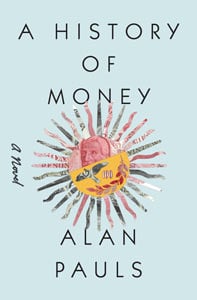 A HISTORY OF MONEY

In its sense of filial obligation and ﬁnancial desperation, Alan Pauls’s latest novel recalls D.H. Lawrence’s “The Rocking-Horse Winner,” an eerie tale about a boy’s feverish obsession with his family’s financial insecurity. The teenage boy at the centre of A History of Money is growing up in Argentina in the 1970s during military rule and economic chaos. His family’s financial circumstances reflect that of his country. His mother has remarried a wealthy man. Still, she is always without money and endlessly pilfers her young son’s savings. His father, on the other hand, makes a living gambling, acquiring and desiring little more than cold, reliable cash.

As the story opens, the narrator is attending the funeral of a steel executive, a family friend who is the victim of a helicopter crash. The man had been on his way to settle a union dispute with a suitcase full of money. Mysteriously, the suitcase was never found. Everyone wonders: Where is the money? Which is the question that obsesses the narrator in his relationships with his spendthrift mother, his financially secretive father, the women he loves and Argentina itself. Inheritance, the money of ghosts, are the only funds anyone believes in and, even then, thinks the narrator, you never know what a person will be worth.

This is a second novel for Pauls, an Argentinian who is being touted as a literary star. His style is gripping: long stream-of-consciousness sentences punctuated by countless clauses that ought to weigh the narrative down but instead drive it forward with an electric sense of anticipation. Now and again, Pauls stumbles by favouring style over substance. But his depiction of this family is exquisite. In addition, his gifted storytelling often spins out into witty, beautiful essays: “[The] money is a boundless ocean, nothing but horizon, into which millions of wads just like his flow every second, from every direction, losing their identities the moment they plunge in, and surviving for months in a state of total formlessness and amnesia, every trace of their origin and even any quantity distinctions having been wiped out; in the best-case scenarios, they return to being what they once were, when a shore appears out of nowhere and, from it, someone remembers them and recognizes them and returns them to everyday circulation, enriched by the scars left by danger and adventure.”