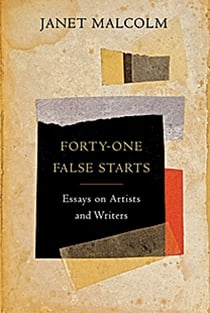 In this collection of essays, published from 1986 to 2011, New Yorker writer and critic Janet Malcolm explores the biographies and art of painter David Salle, photographers David Struth, Julia Cameron, Diane Arbus, Edward Weston and Irving Penn, writers J.D. Salinger, Gene Stratton-Porter, Virginia Woolf, and Cecily von Ziegesar, among others. The essays are more fun to read when one is familiar with the art in question, but Malcolm’s fluent prose vividly evokes the primary sources even in their absence. Her surgical and often brutal criticism delights.

At her best, Malcolm creates art of her own even as she refracts the work of others. Her singular essay about the self-consciously aging postmodernist painter David Salle, “Forty-one false starts,” is a tour de force. The reader must knit together a portrait of Salle from Malcolm’s 41 variously short abandoned introductions. We see Malcolm temporize, hedge her judgments, stutter-step forward and back, and ultimately settle for a story told in fragments. It is utterly brilliant. We see a critic at work, a profiler exposing the churning gears of her own artistic process. In another piece, Malcolm writes a veritable Bloomsbury novel in her rich portrait of the social milieu of Virginia Woolf’s friends and family in the early 20th century.

The essay “A girl of the zeitgeist,” about the editorial history of the magazine Artforum, clocks in at 76 pages. The parochial sniping among various critics will grow tiresome to those unfamiliar with the weeds populating this territory. The collection concludes with Malcolm confessing her failure to proceed successfully with her own memoir. She is rather better at observing others. She struggles to see herself “less coldly,” to be “less fearful of writing a puff piece.” It seems Malcolm’s cutting journalism denuded her of the self-love required to bring sufficient colour to the telling of her own life. Thankfully, she has given us much else.