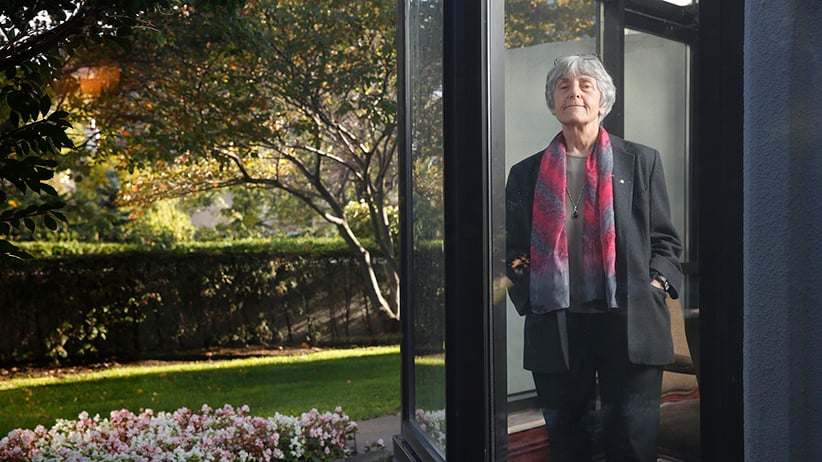 Canada’s most distinguished literary prize awards $100,000 annually to the best Canadian novel or short-story collection published in English. In this series, Maclean’s highlights the work and artistic process of the six Scotiabank Giller Prize nominees. Here, Frances Itani, author of Tell, discusses how she refashions memory.

When Frances Itani set out to write Deafening, her critically acclaimed 2003 novel rooted in the life of her deaf grandmother a century ago, she wasn’t planning another in CanLit’s distinguished line of First World War novels. But she soon realized it’s impossible to write of life in Canada then without exploring the war experience, both on the Western Front and at home. “The war reached into every place, into every little town in the country,” the Ottawa writer said over the phone on Oct. 22 from her locked-down city. “It changed everything.”

So Tell, Itani’s new, Giller prize-nominated novel, was a deliberate return to the war era, picking up almost immediately where Deafening stopped, in 1919. So many of the men who went to war, she says, came back maimed in mind or body, and as unable to talk of their experiences in a repressive Canada as were those, especially women, who had their own domestic secrets. Tell focuses on four minor characters from Deafening, because she “was finished with Grania and Jim,” the two principals, says Itani. But she was not done with the others, and how they fit into her continuing exploration of the war’s still-reverberating aftershocks. “I knew I had stories to tell about them.”

Frances Itani on her writing process

Did my writing life begin when I was a small child, hopping across a spring logjam in the Ottawa River—assigning a name only to logs that would bear weight—as I crossed over rapids to an island in dangerous waters? Possibly.

Did my life as an observer begin when my older sister and I traipsed up and down village streets in a tiny Quebec village in winter, trying to sell boxed Christmas cards to families as poor as our own? Being invited into damp kitchens and taking in every detail while the mothers of schoolmates lifted each card from our sample boxes for slow inspection. Or when I began to drive at 15—having lied about my age so that I could take the wheel of my family’s first car—and when dropping a friend off at his home, learned that he and his family lived in a cellar dug from a mound of earth, with a wooden door that led down to blackness below, no house on top? Maybe.

Sensory images were stored, only to be called up decades later: the white-capped waves, the unending roar of raging rapids—so familiar that I had to open my ears in politeness when visitors came and asked how it could be possible to live so close to such violent sound. I stored the outline of every tree, every rock, every hole dug into river shale—where my older brother and I buried birchbark maps. My brothers and sister and I explored the village woods and had earnest conversations about whether chokecherries were poisonous fruit—even so, we picked them. We carried those, and crabapples, home to our mother who transformed the shrunken bitter fruit into sweet-tasting jam. My childhood dreams were of falling stars and trading posts and ancient portages on the dirt path where our tiny bungalow was perched on the edge of the river.

Later, I listened to my own children. My young son was talking to himself one day, repeating the facts of an adventure he had just been through. He looked up at me and felt the need to explain: “I have to have stories to tell my children, too,” he told me, and for both of us that was a solemn moment.

My writing life is about storing the nature of experience. Studying, travelling, observing the human condition, listening to what others have to say. When I first began to write the stories of my imagination, I made a commitment to my profession. For 40 years I have been creating characters, poems, short fiction, children’s books, novels: each book a challenge while learning continues. I have been rummaging through history and imagining eras and periods of time that existed long before I was born. Never am I unaware of negotiating the obstacles set before all of us by that old harpy, Life. Having chosen the writing life, I do my best to make my way around and through these obstacles. Hoping that I will, at least in part, understand.

David Bezmozgis: When novel time and real time clash
Miriam Toews: Nudging along a difficult conversation
Heather O’Neill: Addicted to the drug of books
Padma Viswanathan: Shadowed by a bombing
Sean Michaels: When the story is stranger than fiction