A single mom who chooses donor sperm over boyfriend sperm 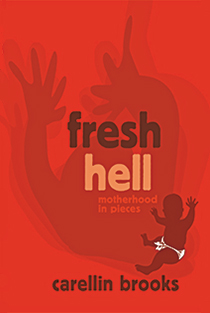 Vancouver-based Rhodes Scholar Carellin Brooks transcends the genre of frazzled mommy books with a darkly humorous novel about a single mom who chooses donor sperm over boyfriend sperm to conceive her second child. The story starts with the narrator justifying the decision: “Your first child’s life had evolved into a skein of messy arrangements and compromises: the visits with your ex, not to mention the father’s new romance, inconveniently conceived elsewhere and thus necessitating extended out-of-town visits. You’d at least avoid that nibbling hell this time.”

The narrator lives in separate quarters from her boyfriend. Brooks lights up a scene with her inventive descriptions of a newborn that won’t stop crying. “If it was a fire alarm, you’d remove the batteries. A toy, you’d sue the manufacturer. A concert, you’d get up and walk out.” Though the baby feeds like a tick and “its legs are frankly obese, with folds you have previously seen only in American supermarkets,” there comes a time when the mother admires it adoringly. In book time, this period lasts all of a page and a half, then it’s on to more hellishness. “The baby is a Jekyll and Hyde: in daylight and in company all smiles, at night an unmedicated psychiatric patient howling mayhem and riot into your ear.”

When she receives her doctoral degree at Oxford, she brings the baby, observing the event with self-deprecating humour. “You go into the dining room through the passage only the dons use.” Dessert is a banana, “the man next to you ate it with a knife and fork, as far from Darwin as he could get.”

Throughout, the baby is kept quiet with junk food, disregarding the ban at home on sugar. For its first birthday, it receives homemade breast-shaped carrot cake and drinks sparkling apple juice from a flute. “‘Evidence,’ someone says, taking a picture. Social services.” The boyfriend, now ex-boyfriend, declines to attend the party.

“One more year to go, before [baby] attains the intelligence of a terrier,” writes Brooks, before asking, “What you really want to know: when it can dress itself, pack its own bags, be entertained by strangers while you snake away to do . . . what?”