Gay Talese on the creepiest motel in America 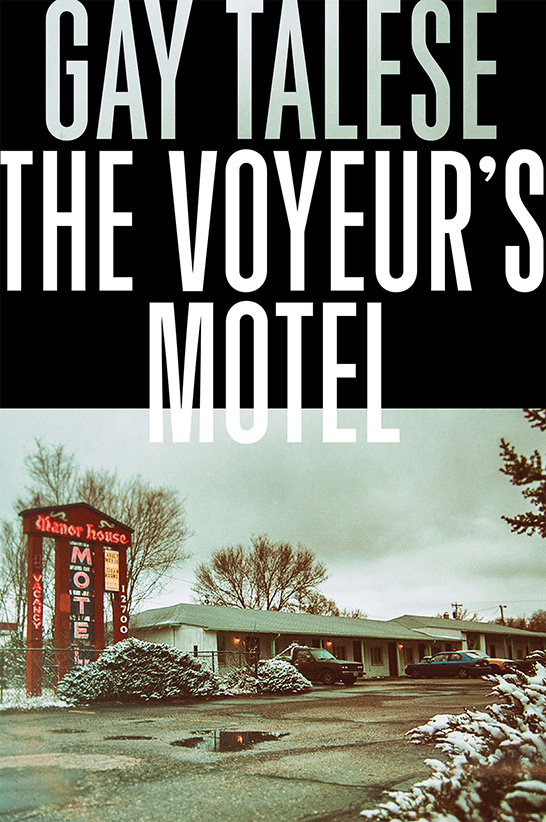 Voyeurs don’t like spending too much time alone. So in 1966, Gerald Foos bought the Manor House Hotel in Aurora, Colo., so he could spy on people having sex. His guests likely figured the six-by-14 inch rectangular slots into the ceiling were for ventilation; he was watching from six to eight feet above in silence. His reasons weren’t simply masturbatory, though Foos did that often; rather he is a self-described sex researcher—akin to Alfred Kinsey—only Foos’s detailed notes were truer to real life, as no one knew he was watching.

It’s an unsettling read, The Voyeur’s Motel; Foos’s entries are presented verbatim throughout, which is creepy enough. But the book is made all the more uncomfortable by the fact that Talese knew Foos was staring on guests after they met in 1980. Telese—a regular New Yorker contributor and pioneer of New Journalism—was even invited for a clandestine viewing session, where he was fixated enough on an attractive woman servicing her partner that he didn’t notice his necktie slip through the vent flaps, nearly getting them both caught. Talese never called the cops on Foos; his invitation to the hotel was permitted only if Talese signed a confidentiality agreement, and he’s a man of his word. So Foos kept on watching—and Talese kept on getting updates in the mail—until Foos’s aging body couldn’t keep up with the workload and he finally sold the hotel in 1995. In 2013, he tells Talese he’s ready to go public with the story, figuring the statute of limitations for his crime has passed. That, and he has a massive sports memorabilia collection he’d like to sell and this might drum up some interest.

While Foos fancies himself a researcher, he isn’t much for randomized, controlled studies. He gives the best-looking couples—rather, the most attractive female guests—rooms with the best sightlines for his viewing pleasure. When one couple prefers a pitch-black atmosphere, Foos turns on his car lights, fixed on their main floor window. Alas, not everyone goes to a hotel to fornicate. Some spend the night arguing—about jobs, finances, or what to watch on TV. In these cases, Foos is noticably irritated in his “conclusion”—he’s a “researcher,” remember—deciding the couple has a unhealthy sex life and is likely doomed to divorce.

Still, Foos’s notes offer a long-term glimpse into the sex lives of Americans. In the mid-’60s, a white woman would never show up at his registration desk with a black partner. A decade later, the stigma of interracial relations was gone. He keeps statistics: between 1973 and 1974 oral sex in white heterosexuals jumped nearly fourfold, from 12 to 44 per cent, a jump possibly attributed to the release of the pornographic film Deep Throat.

His journal also highlights the aftermath of the Vietnam War. The luckier of the wounded veterans have understanding partners. The unlucky majority has stories that could bring one to tears.

Foos witnesses incest and rape, and most disturbing of all, a murder, when a drug-dealing boyfriend choked his girlfriend to death for supposedly stealing his drugs. But Foos can’t risk telling the police everything he saw; nor does Talese, though he was privy to the news years after the fact.

Talese openly talks about his ethical dilemma. And he points to several holes in Foos’s storytelling, which can be attributed to sloppy note-taking, mistaken dates, or flat-out lies. Some of those lies came to light after the book’s publication, when the Washington Post discovered that Foos sold his hotel in 1980 and repurchased eight years later, an important detail never shared with Talese. Whether he’s a credible researcher or not, Gerald Foos reaches the conclusion that people are basically self-interested liars and cheaters in private. Now that he’s let everyone in on his 30-year secret, readers can reach their own conclusions about him.