George Will on Wrigley Field

A review of 'A Nice Little Place on the North Side: Wrigley Field at One Hundred' 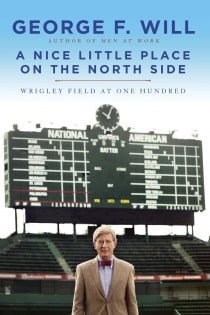 A NICE LITTLE PLACE ON THE NORTH SIDE: WRIGLEY FIELD AT ONE HUNDRED

By George F. Will

The latest book by veteran pundit, baseball fan and bow-tie-wearer George Will is mostly a nostalgic tribute to the team he follows, the Chicago Cubs, and their home park, Wrigley Field, perhaps the most beloved stadium in all of baseball—and, after a full century, one of the few that has avoided demolition or replacement. But, like any fan of a team that always loses, his nostalgia is laced with bitterness: One of the running themes of the book is that Cubs fans seem to love the park more than they want to win.

In between anecdotes about the Cubs’ many humiliating losses—their last trip to the World Series was in 1945, when all the good players were at war—Will gently criticizes what he calls, in one long hyphenation, “Wrigley Field’s golly-the-ivy-is-so-green-and-the-sun-is-so-warm-and-the-beer-is-so-cold-and-the-ambience-is-so-gosh-darned-friendly-who-cares-what-the-score-is” ethos.

He approvingly cites a study by two Cubs fans, Tobias Moskowitz and Jon Wertheim, pointing out that, whereas Yankees or Red Sox attendance drops when they’re not winning, Cubs attendance sometimes increases when they have a bad season. Will supports this idea with historical anecdotes, noting that team owner William Wrigley would improve the quality of the ballpark instead of improving the quality of the team, knowing that Chicago fans would show up no matter how badly the club was doing. “You can say this for Cubs fans: They are not front-runners,” Will writes. “You can say this against them: They are incorrigible.”

This argument that laissez-faire fans are partly to blame for the team’s woes, while interesting, is not enough to fill a whole book. So much of the short length of A Nice Little Place on the North Side is devoted to the famous stories from Cubs history, sometimes seemingly chosen at random: If it happened in Wrigley, be it Babe Ruth’s “called-shot” home run or the management’s failed experiment with having four coaches run the team simultaneously, it was deemed worthy of inclusion.

As a history of the franchise, or even of the park, then, readers will have to look elsewhere. But the book is still valuable for giving us a quick look at a respected baseball commentator’s love-hate relationship with his team and stadium: It contains both his tribute to Wrigley Field’s “elegantly practical” design, and his suspicion that fans should be demanding more of the Cubs than ivy-covered walls.